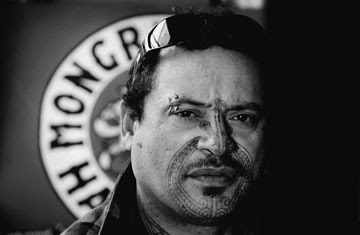 He said the Government should use anti-terrorism legislation, including the 2002 Terrorism Act, as part of its arsenal against organised crime.

"The average frontline policeman is quite clear: they need to be able to harass and harry gangs out of existence.

Gang members face tougher jail terms, with police given greater powers to spy on them, in a Government crackdown on organised crime.
More leeway for police under search proposals
Read feedback

The fallout from the gang-related drive-by shooting of Wanganui toddler Jhia Te Tua has prompted a revision of laws governing gangs.

But critics say a golden opportunity to outlaw them has been lost.

The Crimes Act would be amended to allow the maximum sentence for participating in an organised crime group to be doubled to 10 years.

Simply being part of an organised crime group would become a stand-alone offence, and judges would be given more powers to cite gang affiliations when imposing longer jail terms.

Prime Minister Helen Clark said the changes were prompted by the murder in May of two-year-old Jhia amid tensions between the Mongrel Mob and Black Power in Wanganui.

"We've certainly been looking at ways of tightening the law so that the police have a better chance of getting convictions around gang-related crime," Miss Clark said.

Twelve Mongrel Mob associates charged with Jhia's murder are due to reappear in court tomorrow.

Wanganui Mayor Michael Laws, who has championed a bylaw banning gang regalia in the central city, said the law changes were "a step in the right direction".

However, more needed to be done to eradicate gangs, including outlawing membership.

"I don't want to be seen slamming the Government, but they have been in power since 1999. We are still a long way away from the proper solution - outlawing gangs."

He said the Government should use anti-terrorism legislation, including the 2002 Terrorism Act, as partof its arsenal against organised crime.

"The average frontline policeman is quite clear: they need to be able to harass and harry gangs out of existence."

National accused the Government of ripping off its ideas, and NZ First MP Ron Mark said it was "sick irony" that the Government was proclaiming measures to clamp down on gangs while failing to outlaw them.

"Parliament has no problem banning foreign terrorist organisations. It now needs to accept that these are our own home-grown domestic terrorists and that they deserve the same treatment," Mr Mark said.

"This will have no effect on organised crimes or gangs, because most of the offences they're involved in carry more than 10 years in prison anyway."

Gangs had been around since the 1950s and organised crime since the 1970s, and both were here to stay, Dr Newbold said.

He pointed out that prisons were a rich recruiting ground for gangs and that Mr Burton, who said two years ago that there were too many people in prison, was now talking about locking up more people.