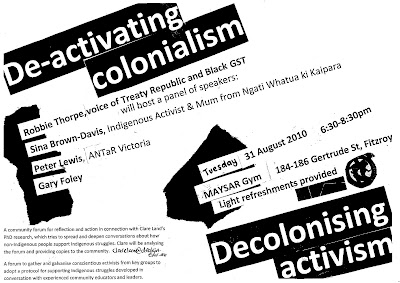 Activate the decolonisation process and you end up with a treaty!” - Robbie Thorpe


A community forum for reflection and action in connection with Clare Land’s PhD research, which tries to spread and deepen conversations about how non-Indigenous people support Indigenous struggles. Clare will be analysing the forum and providing copies to the community.
Posted by Ana at 13:15 No comments:

A report released today by the Independent Police Conduct Authority concluded that the actions of four police officers who used force against Rawiri Falwasser at Whakatane Police station were unnecessary, unreasonable, and unjustified.

Meanwhile, the really appalling thing about this case is that most of the officers have got off scot free. All were acquitted at trial in 2008 (apparently wearing a police uniform allows you to beat and torture with impunity), and while one has since resigned, the other two were either transferred or demoted. That's just not good enough. There should be no place in the New Zealand Police for thugs who beat prisoners. Their continued presence in the police force is yet another reason why we cannot trust or respect it.

Chief Selwyn Garu, Secretary General of the Malvatumauri announced that the council of chiefs had unanimously endorsed the Mele Declaration on Land in Melanesia.

The declaration, prepared at a regional meeting last June, states: “We are opposed to any form of alienation of land from customary landowners, whether by outright sale or through leases which remove landowners’ capacity to effectively control, access and use their land.”

The declaration also calls for the overhaul of land administration in Melanesia and rejects “all policies which require that customary land be registered as a precondition for business or development activities.”

The Malvatumauri, a national body which unites chiefs from 20 island councils and two urban councils, is meeting in Port Vila this week.

The Mele Declaration was prepared by the Melanesian Indigenous Land Defence Alliance (MILDA), a network of landowner, cultural and community groups concerned with land tenure and development across the Melanesian region.

MILDA was founded at a meeting in Madang, Papua New Guinea in 2009. Their second meeting at Mele village in Vanuatu last June brought together a range of organisations “to strategise a regional response to the persistent pressure for registration and leasing of customary land.”

The Mele Declaration was prepared at the June meeting, which brought together chiefs, church leaders, members of women’s and youth groups and other participants from Vanuatu, Papua New Guinea, Bougainville, Solomon Islands, Fiji and Australia.

Changing land use for tourism

In Melanesian nations like Vanuatu, Fiji and Papua New Guinea, over 90 per cent of land is held by customary land and resource owners.

“Custom defines the use of land, but custom cannot be practiced on alienated land – it can only be practiced on custom land,” he stated. “Land continues to be the main source of employment for the people in the villages. With land, we have all that we need.”

In spite of this, many land owners on Vanuatu’s main island of Efate have granted long-term leases to overseas investors for tourist projects and private strata title developments, which have effectively alienated much of the shoreline along the coast.

Landowners must compensate the leaseholder for improvements to the land if they wish to reclaim their land at the end of the lease. For this reason some villagers will find it difficult to reclaim leased land after decades of construction or improvement on land provided under long term leases.

The chiefs’ decision comes as government leaders from around the region have gathered in Vanuatu for the 41st Pacific Islands Forum.

After endorsement by the Malvatumauri on Wednesday morning, the declaration was launched at the Chiefs’ Nakamal in Port Vila by Chief Selwyn Garu, Joel Simo of MILDA and Ralph Regenvanu, the Member of Parliament for Port Vila.

Regenvanu, one of the co-founders of MILDA, called on Forum leaders to protect land rights as the basis of the Melanesian economy: “We would like this Declaration to inform what the Forum is doing and the decisions that they’ll take in the next few days. We are urging our leaders of government, we are urging international financial institutions (including donor countries) but especially our own leaders to move away from policies that talk about land registration as a prerequisite for gaining credit.”

Regenvanu added: “Over the last couple of years, we’ve managed to get the concept of the ‘traditional economy’ on to the agenda in Vanuatu, in the Melanesian Spearhead Group and in the Forum. But we need to have our leaders seriously taking this concept, this reality on board - the traditional economy continues to be the main source of sustenance for people in much of Melanesia.”

For Chief Selwyn Garu: “I’d like to say that land is a living thing. It gives life. It empowers life and you can’t reduce the value of land the way it is being done nowadays in many parts of Melanesia.”
Posted by Ana at 09:40 No comments: