Academics and activists applaud former prisoner Lex Wotton at the First Nations Conference at Townsville in north Queensland.
Posted by Ana at 07:47 2 comments:

Vanuatu Government must walk with its people on WTO decision ‐ PCC

PRESS RELEASE: For immediate Release Vanuatu Government must walk with its people on WTO decision ‐ PCC 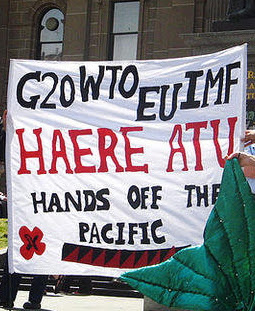 The Pacific Conference of Churches (PCC) is urging the Government of Vanuatu to reconsider its decision to silence the church body and other ni‐Vanuatu voices trying to fulfill their rightful responsibility as fellow burden‐ sharers in such an important decision.

PCC’s Acting General Secretary, Reverend Francois Pihaatae said, the Government of Vanuatu has repeatedly heard the call of its communities, the traditional chiefs and civil society organisations, including the Church body, to refrain from continuing on its current path towards joining the World Trade Organisation (WTO).

“In recent months, the call has taken to the streets because the voices of a people would not be heeded,” he said
While recognising the value and necessity of trade regimes and economic development, their very purpose is for the benefit of the human person; on their own, no system is self‐justifying. The concern for the human person, especially the poor and marginalized, is a central concern of our Christian faith. The question, therefore, is whether joining the WTO will enhance the wellbeing and opportunities for the poor or will it deepen poverty and increase inequality.

According to Rev.Francois, the voice of opposition by the churches, NGOs and community groups, including their chiefs, are both genuine and justifiable given that joining the WTO, whilst offering no clear advantages, will have profound risks to peoples’ livelihoods and to their future. “The binding and far‐reaching conditions of joining the WTO accentuate the inextricable link between what the government decides and the wellbeing of all ni‐ Vanuatu.”

“Concerns stem from what ni‐Vanuatu see as a basic lack of meaningful consultation on the implications and benefits of WTO membership, through to outright rejection of current accession conditions. Such a decision can only be made through meaningful, informed and participatory dialogue with the people, which, apparently, was not the case.Clearly, Vanuatu’s accession to the WTO under current provisions does not have the support of a significant part of Vanuatu society.”
“Opposition to the direction the Government is taking has also offered much constructive criticism in pursuit of more favourable participation in global trade. Alternative view points have been offered by members of the ‘Say No to WTO’ campaign comprising various Vanuatu community groups, local CSOs and international NGOs, which have freely invested valuable resources to inform discussions.”

According to Rev. Francois, this expression of public courage and will by the people to accompany their government in negotiations with the WTO is therefore to be celebrated, not stifled.“Limiting the people’s ability to freely organize in a civil manner and to express opposition to the existing WTO accession package is counterproductive to the very foundation upon which the Vanuatu Government seeks to govern, to serve, and indeed to ensure sustainable security.”

“Rather than stifle opposition to the current WTO accession process through restricting civil organisation, the Government is encouraged to respect and embracethe opportunity being extended by the people to heed their views and to profit from their contributions, technical and otherwise.”

“Beyond the technicalities and specifics involved, whether these concern trade rules or the economicsand legalities of issues associated with WTO accession discussions, it is the firm view of the PCC that there is a key message from this experience requiring discernment.” According to Rev. Francois, the Church, traditional leaders, communities, CSOs and individuals have joined in expressing a common desire ‐ that the Government of Vanuatu heedits people and walk with them.