Birmingham film maker and photographer Pogus Caesar knows Handsworth well. He found himself in the centre of the 1985 riots and spent two days capturing a series of startling images. Caesar kept them hidden for 20 years. Why? And how does he see Handsworth now?.

The stark black and white photographs featured in the film provide a rare, valuable and historical record of the raw emotion, heartbreak and violence that unfolded during those dark and fateful days in September 1985.
Posted by Ana at 12:52 2 comments:

Hikoi to oppose the marine and coastal bill 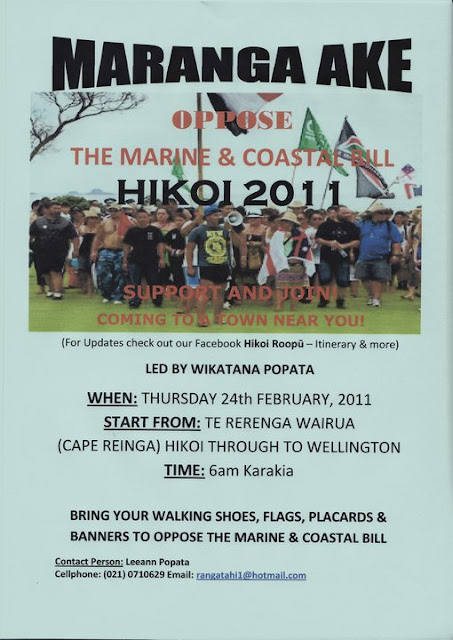 Te Uri o Hau is disappointed that the Environment Court has recommended that the Minister of Conservation grant resource consents to Crest Energy Kaipara Ltd to place 200 turbines into the Kaipara Harbour, New Zealand’s largest estuarine ecosystem, but is pleased with “real gains” achieved in the consent conditions. The Ngati Whatua hapu became involved in the project through its environmental subsidiary Environs Holdings Ltd after concerns were raised about the ecological and cultural impacts of the large scale development.

Each of the 200 turbines will be 22m high, measured from the seabed. “A project of this scale has never been undertaken before – in New Zealand or the world. Although we are pleased that the Court has placed additional restrictions on the project, we remain concerned that the conditions do not go far enough as we believe there are inherent risks in a project of this scale.” says Te Uri o Hau Settlement Trust Chair, Mihi Watene, from Waikaretu Marae, Pouto.

“We are concerned about effects on fisheries including snapper, and other marine life, such as maui dolphin. According to a study by NIWA, 98% of all North Island west coast juvenile snapper originate from the Kaipara Harbour, and we already know that the commercially important west coast snapper stock (SNA8) has only 8% of its original stock left” says Ms Watene.

However, Te Uri o Hau welcomes the requirement that only 3 turbines can be initially installed, rather than 20 as originally proposed. Other gains are a requirement for Crest to monitor the effects for at least one year after the first installation, and that the public is expected to be involved in the Northland Regional Council’s consideration of whether to allow further stages to be developed.
However, the hapu remains concerned about the uncertainty and the irreversibility of potential effects. “We don’t want to take any risks in this delicate ecosystem. The Kaipara Harbour needs to be protected” says Ms Watene.

Te Uri o Hau would like to see the consent refused, granted for a shorter term, or granted with more stringent monitoring and staging requirements. “We hope the Minister of Conservation, Kate Wilkinson, will err on the side of caution and adopt our suggestions for a more careful approach” says Ms Watene.