Chief Selwyn Garu speaks on customary land in Vanuatu and the problems brought about by (Australian-backed) attempts to commercialise it.
Posted by Ana at 22:05 No comments:

August 21st marks the 40th anniversary of the execution of George Lester Jackson. The Chicago- born Jackson would have celebrated his 70th birthday on September 23rd.

Jackson was a prisoner who became an author, a member of the Black Panther Party, and co-founder of the Black Guerrilla Family prison organization. He achieved global fame as one of the Soledad Brothers before being executed by prison guards in San Quentin Prison.

Based on an edited portion of Prisons on Fire by the Freedom Archives (2001) with video editing by Oriana Bolden.

Same old tuku tarau he's just another authoritarian Maori 'leader' who hates being held accountable....to anybody. I'm Impressed with Morgan Godfery his comments about Tuku being bound to the ideology of privitisation showed more insight & intelligence than the Maori media hacks that interviewed him.

Check out Morgans blog Maui Street & a huge shout out to all the other Maori bloggers out their giving voice to the unheard our flaxroots.

More here about tuku selling out to private prison companies & facilitating the expansion of the prison industrial complex in Aotearoa. 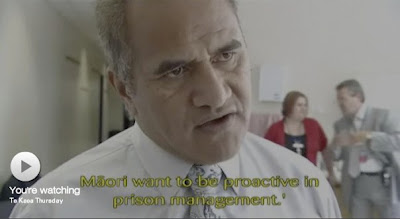 The idea is that iwi, or groupings of iwi, or iwi-private joint ventures will invest in parts of the country's infrastructure, such as hospitals, schools, prisons and roads, through Public-Private Partnerships (PPPs) with the government. This has become more of a reality because the National-led government has made it clear it is more amenable to this type of arrangement than the previous government.

TAINUI WANT CHANCE TO BE OWN GOALERS

He says this is something Tainui believes is critical for long term sustainability and a matter he has personally taken up with prime minister John Key.

“At Waitangi I was part of the presentation to the Prime Minister including the deputy PM pushing the issue of public private developments. We think it is an intelligent approach by iwi to get involved in important infrastructural development,” Mr Morgan says

Akala - Fire In The Booth

Darcus Howe on the 'London Riots'

Darcus Howe, a West Indian Writer and Broadcaster with a voice about the  riots. Speaking about the mistreatment of youths by police leading to  an up-roar and the ignorance of both police and the governement
Posted by Ana at 21:38 1 comment: