Greetings Comrades and Friends:
Due to the limited size of Eastside Arts Alliance, we are having a Memorial for geronimo at Bobby Hutton Park (DeFremery Park).  This event will be held Sunday July 17th.  The park is located at 18th and Adeline in West Oakland across the street from the W. Oakland Library.
The Memorial will start at about 3pm.  Come celebrate the life of a Revoulationary. For more information check www.itsabouttimebpp.com  or call 916-455-0908 or the BPP Commemorator  Newspaper 510-652-7170.
We would like to thank Claude Marks of Freedom Archives, Neome Banks of OCS Alunmi  and Carol and Big Man for all their help. 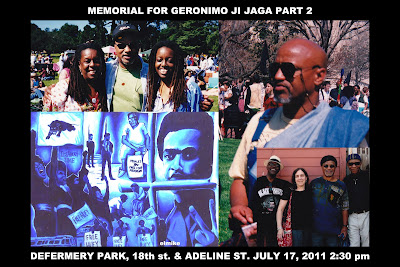 The recent attendance of a group of Māori male politicians at the Destiny Church annual conference and their advocacy for the supposed benefits of that church to Māori people highlights the political purgatory that Māori find ourselves in leading up to the November election.

The scenes of Pita Sharples, Hone Harawira, Tau Henare and Shane Jones lining up to be ‘blessed’ and to hear their platitudes of thanks to a homophobic and misogynist institution is not merely disturbing it is sickening. We should never forget the ‘enough is enough’ hate marches instigated by Destiny Church. We should never forget the kinds of hate speeches that Māori gay and lesbian whānau were bombarded with during the Civil Union debate, and the ongoing homophobia that Destiny Church leaders and members continue to openly express with both fervor and hatred.

So, who benefits from a group of heterosexual Māori male politicians standing on such a stage? Not one of those Māori men challenged the underpinning homophobia and misogyny that is espoused by Brian Tamaki. Rather it was avoided like the plague. What does that say to the many Māori gay and lesbian people within our whānau? It says that yet again we are easily sacrificed for 0.5% of the vote. 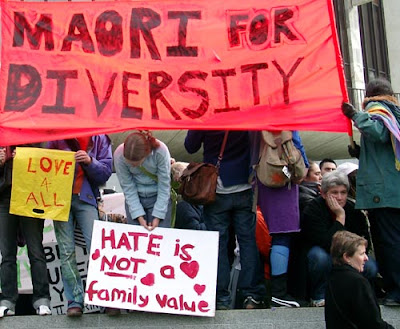 Press Release
More than 50 artists from around New Zealand will be exhibiting work in Wellington at the start of next month to raise funds and public awareness for the arrestees of the 2007 October 15 "terror raids." Exhibited works range from paintings, sculptures, and animation, to a reproduction of the assassination device police claim "terror raids" arrestees planned to use - a catapult designed to launch a bus onto the head of former US president George Bush.
According to contributing artist and spokesperson Lance Ravenswood, the charges against the 18 arrestees of the October 15 raids are "just silly. Any sensible person should feel that the police and courts need a good telling-off about the way they’ve been behaving.” A number of prominent figures have also spoken out against the handling of the case, including civil rights lawyer Moana Jackson and Professor Jane Kelsey.
“Why have these people been denied a trial by jury? Why is there so much secrecy surrounding the legal proceedings? The police seem to be equating legitimate political and environmental activism with terrorism," says Ravenswood.
Richard Meros, author of On the Conditions and Possibilities of Helen Clark Taking Me as Her Young Lover, will be exhibiting a piece in a similar tone, entitled Your Honour We Eat These Charges For Breakfast, featuring berry-soaked strips of the 2002 Terrorism Suppression Act (TSA).
“This muesli celebrates the afternoon the Solicitor General’s office struck down the use of the TSA against those arrested on October 15, 2007, reminding bowels and brains that the charges of terrorism were not even strong enough to be presented to a court” says Meros.
The exhibition will open at the Garrett Street exhibition space on Friday June 3rd at 4:30pm, followed by a screening of Errol Wright and Abi King-Jones’ documentary about the October 15th raids, “Operation 8: Deep in the Forest”. Viewing will continue over the weekend.
“We’re concerned about whether justice is being done here. Lots of people in the community have questions about this case - we want them to get together, experience some great art, and talk about what’s going on,” says Lance Ravenswood. “As artists, we want to do what we can to help 18 New Zealanders who are being punished, before the trial even takes place, by an immense financial burden in a drawn-out battle against extremely questionable charges. That’s why we’re donating our work, to raise funds to support the defendants and their families through the trial.”
The Concerned Citizens exhibition will feature work from up and coming as well as more established artists, including Peter Madden, Roger Morris, Bryce Galloway, Arlo Edwards, Kerry Ann Lee, and Tao Wells, creator of the controversial Beneficiary’s Office installation in 2010.
Posted by Ana at 14:57 No comments: