Report details unacceptable impacts from deep sea mining by Canada’s Nautilus
November 24, 2011 – Port Morseby, Papua New Guinea/ Ottawa, Canada/ Melbourne, Australia. The Centre for Environmental Law and Community Rights in Papua New Guinea (PNG) and MiningWatch Canada and have released a new report called “Out of Our Depth.”. It details serious environmental and social impacts expected as a result of unprecedented mining of the ocean floor in PNG.

Canadian mining company Nautilus Minerals Inc. (Nautilus) plans to extract gold and copper from the floor of the Bismarck Sea in 2012 at its Solwara 1 project. The project will mine active and inactive hydrothermal vents at 1.46 kilometres under the sea. Thousands of these vents over an 11 hectare area will be destroyed. Possibly the origins of life on earth, these high-temperature underwater vents host unique species, most of which have not yet been identified or studied.

The underwater mine site is located close to coastal communities that rely heavily on sea food for diet and income. The project is raising alarm among these directly affected communities, as well as among PNG citizens who question the environmental process that led to the licensing of the project.

“The PNG Constitution in its preamble provides for sharing of natural resources with future generations. The current trend shown by our political leaders have taken the direction that they are not worried about the future generations anymore. It is “the now” that matters to them. Every mine on land, be they gas, oil, and other natural resources including mining under the ocean is set to be opened. The brain, pen and ink used to draft the preamble of the Constitution was a waste of time.”

Helen Rosenbaum, author of the report, says “Nautilus has prepared a deeply flawed Environmental Impact Statement. For example, the company has insufficiently tested the toxicity of its process on vent species, and has not sufficiently considered toxic effects on organisms in the marine food chain.”

Catherine Coumans of MiningWatch Canada, an editor for the report, notes “once again a Canadian company is set to inflict unusual environmental and social harm in Papua New Guinea in a way that would not be permitted in Canada. Canadian mining company Placer Dome dumped mine waste into the sea for many years and Barrick Gold is currently using a major river system as a mine waste dump. It is tragic that Canadian mining companies are profiting from weak governance in Papua New Guinea.”

We have very little understanding of the deep sea. We have even less knowledge of the potential impacts of deep sea mining on marine life and local communities who depend on the sea for their lives and livelihoods.

Another case of greed over the environment and communities rights ... it needs to be stopped!

There is NO Separation between colonial Expansion the ongoing subjugation of Indigenous life, and the Capitalist exploitation of Life for economic gain. Further these objectives have always been pursued with extreme brutality and a callous disregard for any life that gets in the way.
If you feel expendable its because to the current power structure you are, all life is.
In the conquest of the Americas Capitalism is inseparable from colonialism and imperialism." Waziyata Win
Posted by Ana at 06:53 No comments: 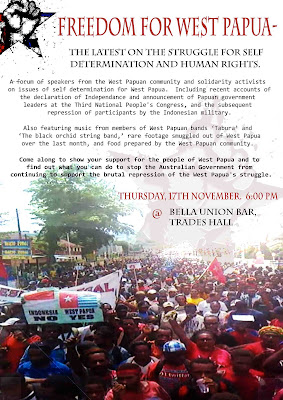 You might have seen some of the shocking reports that have been coming out of West Papua over the last month (in particular the coverage in New Matilda has been excellent http://www.newmatilda.com.au/2011/10/20/troops-open-fire-papuan-gathering ).

Here is a chance to get an update on the situation and some ideas on how you can act in solidarity with the people of West Papua. And a chance to enjoy some West Papuan food, a film and a West Papuan band The Black Orchid String Band.

Freedom for West Papua - the latest on the struggle for self determination and human rights.

Speakers from West Papuan community and solidarity activists on:

- the declaration of Independence and announcement of Papuan government leaders at the Third National People's Congress, and the subsequent repression of participants,
-the ongoing strike at the Freeport mine and,
- the East Asian Summit in Bali bringing together regional governments for strategic discussions (incl: Aus, US and China)