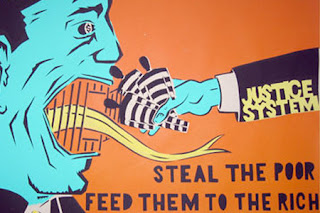 Guest Speaker Rev Ron Givens. Ron is a prison chaplain from California and is the Political Director of UNION (United for No  Injustice, Oppression orNeglect). UNION campaigns... against  California’sthree strikes policy of minimum sentences similar to those  proposed here byACT. Ron will talk about the horrendous situation in California’s jails and the serious injustices caused by the three strikes policy. 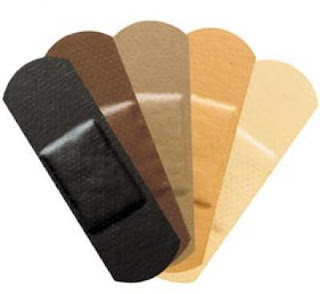 The Maori Party has been a huge disappointment and Whanau ora will likely be its biggest failure.

The party was formed amid well justified anger and frustration at the Labour government’s panicky move to legislate across Maori rights to have claims to the foreshore and seabed heard in the Maori Land Court.

The break with Labour had happened before. Back in the 1990s Maori voters sided briefly with Winston Peters before his New Zealand First party was decimated under coalition pressure from National.

The Maori Party injected fresh energy into Maori aspirations via MPs with no previous parliamentary baggage such as Pita Sharples, Hone Harawira and Te Ururoa Flavell. However for such a race-based party the danger was always there that they would lose sight of the wood for the trees. And so they have. The party is fixated on improving things for Maori but at the same time endangering provision of services for people in low income communities who themselves are disproportionately Maori.

This approach was highlighted in the bizarre story last month of the Maori Party signing up to an ACT-driven working group report which is asking the government to consider extending so-called education “choice” for children from low income communities. This would increase opportunities for a tiny number of children at the expense of the majority who would suffer by further reduced state responsibility for the quality of education in our schools.

With Whanau Ora we have a similar approach with the aim to benefit struggling Maori families which National will use to undermine state provision of social services and open the sector for the damages and ravages of privatisation. Maori will be the predominant losers.

Maori Party co-leader Tariana Turia sees Whanau Ora as her own and the Maori Party’s crowning achievement in coalition in this parliamentary term. She seems content to fossick around at the bottom of the cliff picking up the pieces of dysfunctional families while even more victims of government policies pile up around her.

Feeling good at the bottom of the cliff is no substitute for tackling the hard stuff at the top where free-market economic policies create the carnage.

Maori families don’t need big state intervention in their lives. Neither does anyone in a low-income community. I have huge faith in all families to be able to make their own way in the world without big government or a welfare system designed not so much as a safety net but as a minimalist drip-feed to take the heat out of opposition to the catastrophic failure of 30 years of neo-liberal economic policies.

Instead of quality jobs, self respect and self reliance, the free market has delivered to low income communities thousands of pokie machines, endless liquor outlets, loan sharks on every corner and fast-food joints by the bucketful alongside social devastation and destroyed families. Whanau Ora aims to ease the negative effects of the market on families without having the insight to address the problems at their source.

What the party has failed to grasp is that economic policies drive communities. Once a government has decided its economic direction what follows in health, education, welfare or employment is essentially predetermined.

And so instead of tackling the big issues – government policies to provide jobs for everyone while abolishing the dole for example – the Maori Party is content to play Florence Nightingale to the victims of Labour and National policies.

Why on earth would a party set their sights so low?

Even in its lady-of-the-lamp role the Maori Party will struggle to make any meaningful difference. It will bring a few benefits to some families by helping rationalize social services but basing welfare provision for Maori families on Maori concepts will mean little change for anyone until economic policy is based on the same principles. As it stands the best we can hope for from Whanau Ora will be in helping some families devise bunkers to help weather economic storms.

There will also be many families within Maoridom who will resist Whanau Ora. Expect to see welfare refugees seeking respite from attempts by well-meaning Whanau Ora advocates trying to patch up deeply fractured families.

I’ve seen similar attitudes many times working in schools in low income areas where many Maori families see themselves as having greater common cause with their European, Pacific and migrant neighbours and friends than with a distant iwi to which they have no connection.

The Maori Party engagement with National was never going to end in happiness.

It won’t be till the party engages in a serious economic challenge to National and Labour that it will make a significant difference for Maori families.
Posted by Ana at 14:00 No comments:

A recent document released under the Official Information Act (OIA) shows that the Police are heavily spying on and running operations on protest groups. In the Police annual report for the year ending 30th June 2009, a reference was made to “84 operation orders” made in relation to “public demonstrations”. An OIA request for a list of all these operation orders made in October 2009 has now finally been answered by Police National Headquarters and the results are chilling.

In 2008/9, the police ran operations on a “Tibet candlelight vigil”, the “Stagecoach Bus Strike” and a “Palestine Peace Vigil” in Wellington, a “Bible group” outside the US embassy, the “Waterside Workers' Strike” in Auckland and a protest in Otahuhu “re lack of swimming pool”.

A list of the 84 operation orders has been released. However, access to the actual orders has so far been denied.
Peace Action Wellington condemns the action of the NZ Police in conducting operations on protests against the annual weapons conference hosted by the NZ Defence Industry Association and against legitimate political dissent. ‘Protecting these people is protecting war mongers and war profiteers from public disgust, outrage and resistance to their activities’ said Valerie Morse, Peace Action member. ‘In my experience, the police see their role as shutting down protests, and they will do whatever is necessary in order to accomplish that, including extensive surveillance, arbitrary arrest and detention of people without any cause whatsoever.' Continue reading article here 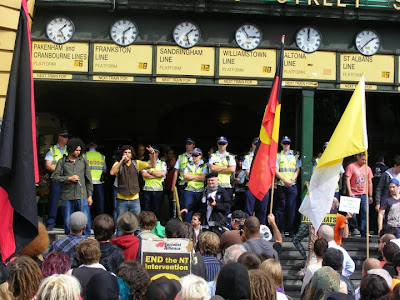 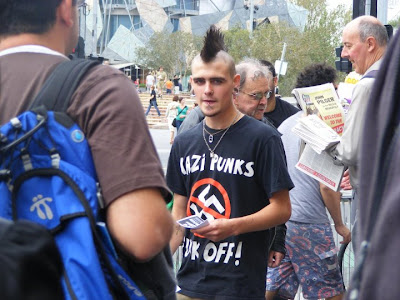 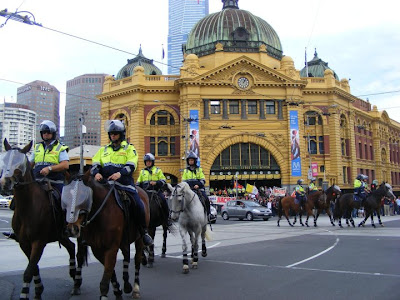 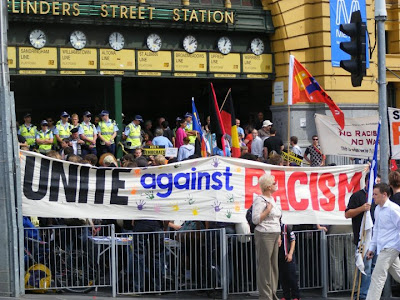 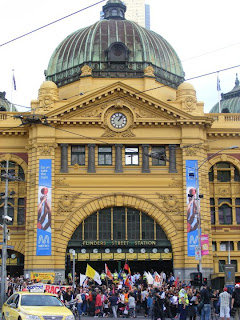 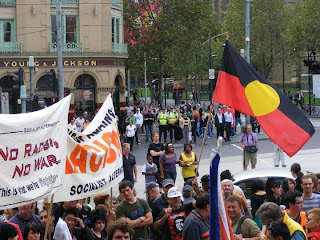 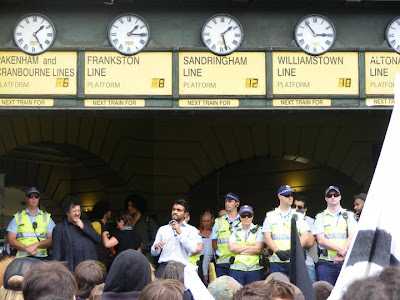 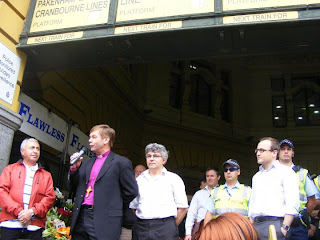 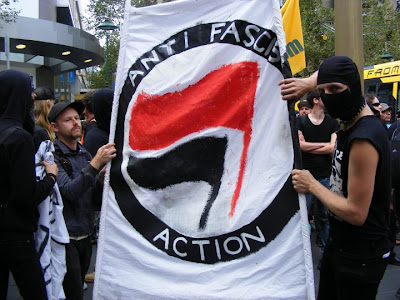 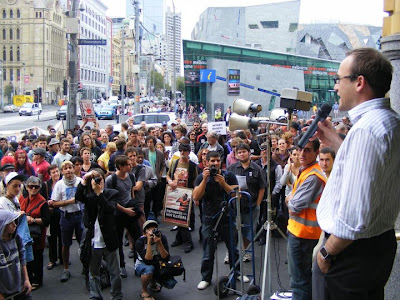 Some racist idiots planned a demo today at Flinder Street Station. 500 anti-racism activists rocked up to meet them. They didn't show. :-)
Posted by Ana at 02:17 No comments:

Moana Jackson: A PRIMER ON THE GOVERNMENT CONSULTATION DOCUMENT ‘REVIEWING THE FORESHORE AND SEABED ACT 2004’.

Email ThisBlogThis!Share to TwitterShare to FacebookShare to Pinterest
Labels: Takutaimoana 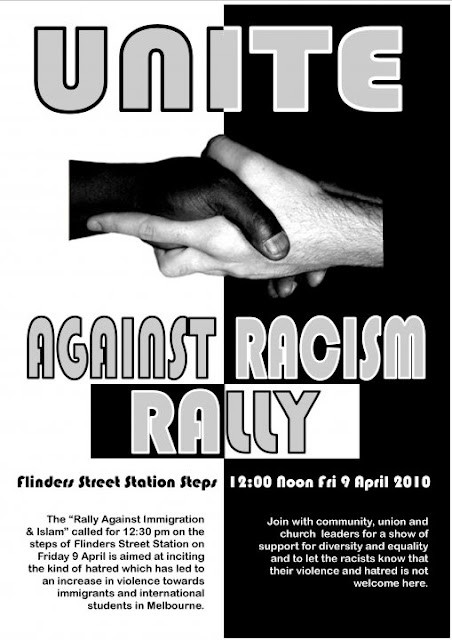 This Rally is organised in opposition to the
"Mass Rally Against Immigration and Islam"
called by some racist fools at 12:30 pm.

We want to be there to let them know that their hatred is not welcome in our city.

Good news. Heaps of people are responding to this rally and it looks like we'll have a big crowd. As this rally has been called at such short notice, we're still awaiting confirmation from guest speakers, but there'll be comedians from the Comedy Festival, Church leaders, unionists, musos and others adding their voices to supporting diversity on the day.

If you wanna help make make this event massive, there's a few things you can do:

1. Download & print at least 1 copy of this black & white poster and put a copy up in your workplace, your library, church or local cafe (or download 100 and put them up everywhere)

2. Share a link to this page to all your FB friends, even out of town ones.

3. Officially let your organisations, be they cultural, union, church or whatever, know about this.

4. Post the event to any newsgroups you're a member of

5. Bring your friends & family and make a fun day of it!

By Diego Hernandez   Chapter 1: The US Prison Crises Chapter 2: Interviews with political prisoners Angela Davis, Mumia Abu Jamal, Assata Shakur Chapter 3: The War on Drugs and its effects on people of color. Chapter 4: Immigration Detention Centers and Latin@s in prison. Chapter 5: The Privatisation of Prisons for profit. Chapter 6: Women in Priso
Posted by Ana at 22:29 1 comment:

Annette Sykes : the proposed options for the Seabed Foreshore Act