EZLN - Our Word is our Weapon

Montage of pictures from the Zapatista struggle in Chiapas, Mexico, with remarks read by Subcomandante Marcos in English
Posted by Ana at 19:49 No comments:

Email ThisBlogThis!Share to TwitterShare to FacebookShare to Pinterest
Labels: against Neoliberalism.FTT, ya basta viva zapatista

A world authority on child health is describing the health of Maori children as an international scandal.

Innes Asher, the professor of paediatrics at Auckland medical school, is leading a study into child illness in more than a 100 countries.

She says Maori kids and others from poor families are growing up in third world conditions similar to the worst slums in countries like Chile and India.

Professor Asher says government is to blame New Zealand ranking at the top of OECD tables for preventable childhood diseases such as pneumonia, meningitis, whooping cough, and rheumatic fever.

“Maori have about double rates of most of those types of conditions but particularly higher rates of rheumatic fever and bronchiectasis which are both permanently disabling conditions of the lungs and the heart so children who get these conditions may die in young adulthood from lung or heart disease or have permanent injury and be unable to work. Appalling high rates by international standards, quite a disgraceful outcome by our country’s children,” Professor Asher says.

She says many New Zealand families can’t afford to take their children to the doctor.

Gord Hill Breaks it down

"You must fight you must resist that's how people will survive invasion, occupation..genocide".
Posted by Ana at 14:27 No comments:

Upper Hutt Posse - Ka Whawhai Tonu Matou from forthcoming album Declaration Of Resistance, made by Te Kupu. Inspired by the staunch resistance of Maori ancestors against invading British colonial army at the Battle of Orakau in 1864.
Posted by Ana at 12:50 No comments:

No Olympics on Stolen Native Land/ Stop the Racist Intervention 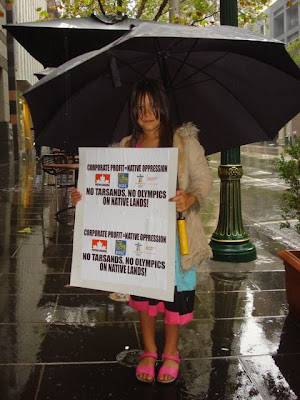 Today in the Kulin Nations we stood in solidarity with our brothers & sisters of the unceeded territories of the Coast Salish peoples.
An over the top federal police presence guarded the Kkkandian embassy from my daughter & me.  The heavens opened up heavy rain giving  a strong affirmation for the kaupapa we were supporting. 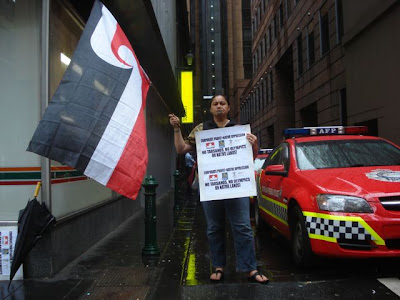 Harriet Nahanee, warrior woman , you will  never be  forgotten, and the price you paid to defend your lands against the corporate circus of the winter Olympics. No Olympics on Stolen Native lands.
We handed out flyers & info & explained the contempt & lack of respect for Indigenous rights in Canada.
The struggle against the Tar Sands bears resonance for us in Aotearoa. The Royal Bank of Canada is advising Kea Petroleum (the pricks who want to rip up & rape the beautiful Tai Tokerau 4 oil & gas). No wonder Canada won’t sign the declaration on the rights of Indigenous peoples. They are to busy facilitating & profiting from  the exploitation & oppression of Indigenous people at home & around the world. 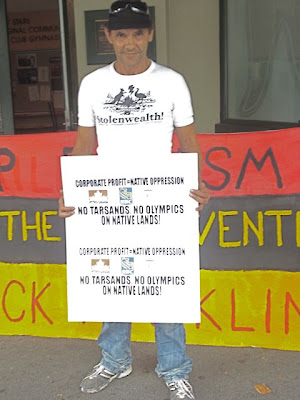 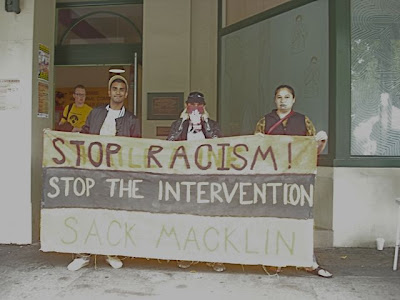 Aboriginal peoples are fighting back, The Ampilatwatja walk off, exemplifying aboriginal dignity & the struggle for self-determination. 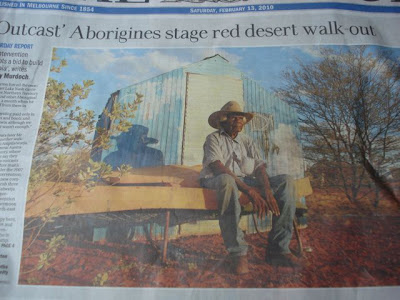 We marched for the rights of all Indigenous that are oppressed, we share the same enemies & the same lived experiences of colonialism & genocide.  Against the odds we have survived. 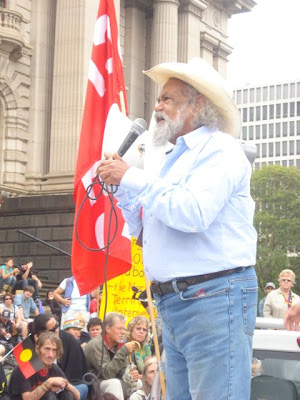 Words of wisdom and fire  from Uncle Bob Randall and Robbie Thorpe,   Our Sovereignty, Self Determination cannot be denied. Indigenous peoples are on the move. Mother earth demands this and we are stepping up. 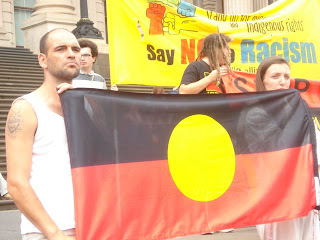 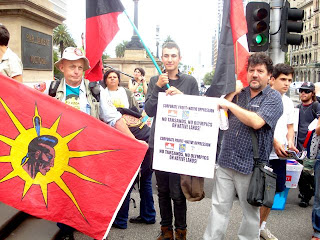