CHILEAN TROOPS FLOWN IN  TO SUPRESS  RAPANUI  - ON THE VERGE OF EXTINCTION  - September 29, 2010
Contact:               Kihi Tuki-Hito   011 56 9 88190047
Levanate Araki  011 56 9 81506843
Santi Hitorangi  1 845 596 5402
This morning a C-47 military plane arrived on Rapanui  (aka Easter Isalnd) with a contingency of SWAT teams to augment the already in-place armed forces set to remove indigenous Rapanui people from their ancestral lands..   Since July 31, the Rapanui have been non-violently re-occupied the land illegally taken from their grandparents and have been , asking for their legal title to be restored.
Tonight the Rapanui people are on high alert – expecting what may come in the wee hours of the morning.
This afternoon Marisol Hito, spokeswomen of the Hitorangi clan,  presented the Rapanui case to the Human Rights Commission of the Chilean House of Representatives.     The Commission unanimously voted to stay any order to harm or remove Rapanui people from their claims.
Marisol Hito stated that,  “We have been asking to negotiate for 60 days with the Chilean government, but they have refused to negotiate and instead sent in armed troops to cause psychological and physical duress .  From day one we have been expressing that our claim is for recognition of title to our lands, and the ability to manage  our sovereignty.   Under Chilean law  only Rapanui people can legally hold title to land on the island.”
The Human Rights Commission filed a protective order for the 18 children that are in occupation at the Hanga Roa Hotel,  reclaiming their land title and future.    The Hanga Roa property was illegally sold during the Pinochet regime to a non-Rapanui  person, and was subsequently transferred to a non-Rapanui corporation, in violation of Chilean law.
Kihi Tuki-Hito  showed the Rapanui flag on the back of his jacket and spoke to  press after the 8 hour meeting with the Human Rights Commission.  He said,  “  We want  to peacefully restore our rights to our land and self government”.
Chile has refused to conduct serious and meaningful peaceful negotiations and has criminalize all the Rapanui claimants in  violation of human rights and  of  the Universal Declaration of Indigenous Rights,  to which Chile is a signatory.
Ironically  Chile uses the Rapanui moai, the well-known monolithic stone statutes,   on its currency and passports  as a symbol colonial supremacy over Rapanui people.
Only 5,000 Rapanui people exist today .   Any violence against them is an act of extinction to these legendary people who are a heritage and treasure of humanity.  In 1994 UNSECO declared Rapanui as a “heritage of humanity.”
If we as humans can save the smallest inhabited place on the planet earth, Rapanui, then when we  can learn how to heal and save our entire human existence on this  planet.
This is a an S.O.S. for the world to save itself.
For more information go to SaveRapanui.org
Posted by Ana at 16:42 No comments:

From Aotearoa to Gaza with Love 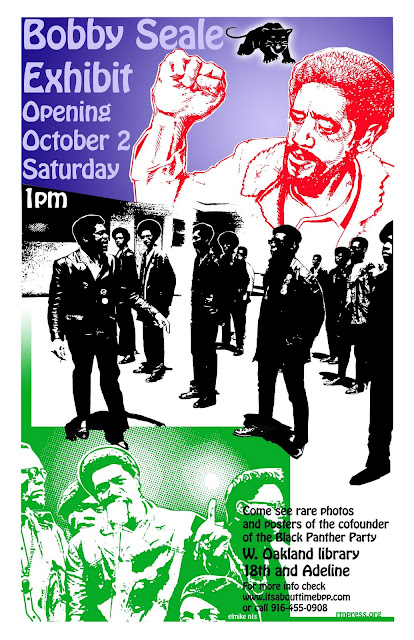 Greetings Comrades: The Bobby Seale Exhibit opens October 2 @ the W. Oakland Library. The program starts at 1pm with Bobby speaking about 1:45pm. James Mott will host the program for the day

Keeping our Legacy alive
It's About Time
Posted by Ana at 13:29 No comments:

Kanaky iwi want their land back from the French

Life and Death of Steven Biko

Lest we forget  Today is the 33rd anniversary day of the brutal murder, in apartheid police custody, of Steve Biko
Posted by Ana at 07:25 No comments:

The Maori organiser for the Council of Trade Unions is encouraging Maori workers and their whanau to get involved in the union movement’s national day of action next month. Helen Te Hira says low income Maori workers have been hit hard by government actions. She says they will get a chance to speak out on what’s being called 20-10 2010. “So on the 20th of October there will be actions up and down the country led by unions but also whanau who are really feeling what’s been a cascade of attacks on working rights,” Ms Te Hira says.
Posted by Ana at 10:22 No comments:

Moana Jackson PRIMER ON THE FORESHORE AND SEABED

Dedicated to Dad on Fathers Day Love & miss you much Papa.
Love & Respect Always
Posted by Ana at 02:12 No comments: