Tufuga ta tatau Su'a Sulu'ape Paulo did my malu (as the Tufunga from his Aiga have done for many generations in my family ) in 1990 great to see Inia give him a shout out,Paulo will be forever remembered and respected.

In the past, the traditional tattoo of Samoan women, called malu, was performed on young women somewhere between the ages of fourteen and twenty-five. These women were important members of a family whose special role was celebrated by marking the body. Today, fewer women wear malu, and there are no firm restrictions regarding who may wear one and when it should be applied. Malu is placed primarily on the thighs and knees, but it can also be found on the lower abdomen, wrists and hands. Like pe'a, malu is bilaterally symmetrical, but the design is sparser, almost lacey, containing linear motifs arranged in vertical, horizontal, and diagonal rows. While men and women share many tattoo motifs, the lozenge-shaped motif called malu is limited to women. Significantly, it is often the first motif applied by the tufunga ta tatau, placed behind the knee joint.

Malu means to protect. While women's tattoo may have had protective significance in the past, today it is discussed in terms of family status and cultural commitment. When a women is preparing to get her malu, she (and often family and friends) will be interviewed by the tattoo artist (tufuga ta tatau) to determine the motifs to be used and their proper placement, so that the finished design will correctly express the family history and personality of the wearer. Similar design personalization through personal interview is also the protocol for men preparing for their pe'a. Since most Samoan women keep their legs covered below the knee, malu is rarely visible in public. Rather it is primarily seen when dancing or sitting cross-legged to make the ceremonial drink 'ava, making the permanent commitment to culture directly relevant to ceremonial events. Although seen on fewer women today, tattoo masters who perform the malu on women state that it is of equal importance as the male pe'a, and that they are worn today for similar reasons 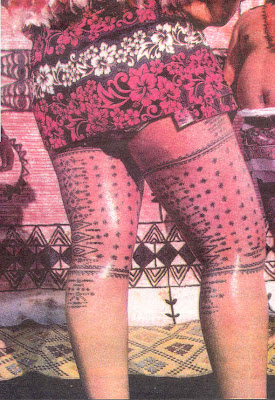