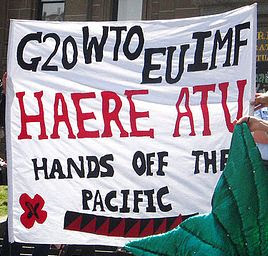 Please show your support for those arrested at the G20 protests in
November last year - DEFEND POLITICAL PROTEST! DROP THE CHARGES!

At a time when civil liberties are under threat we should all support the 27 people facing charges resulting from their alleged participation in political protest against the G20 in November 2006.

The charges are overblown and disproportionate – imposed after a media witch-hunt led by the Herald Sun. They are part of a conservative campaign to discredit protest and social movements for change.

Thousands of people joined the protest against the g20 meeting. We did so because the G20 is an unaccountable elite institution that pushes neo-liberal policies that wreck the lives of workers and the poor. Privatisation, cuts to public health, education and welfare, and WorkChoices-style attacks on workers’ rights are all neo-liberal policies pushed by the G20.

We protested because we want a better world – without corporate greed, endless war against Iraq and Afghanistan, and global environmental destruction. The G20, like APEC, the World Bank and the International Monetary Fund, is an institution set up to promote the interests of the rich and powerful.

It is no surprise that every time they meet, anywhere in the world, they are met with protest and resistance. And that’s why thousands of people will be protesting against the Asia Pacific Economic Co-operation (APEC) meeting, attended by Presidents Bush, Putin, and Hu Jintao, in Sydney in September.

The G20 protest challenged the ‘lock-down’ of the city that the Victorian police imposed to insulate the G20 delegates from the people affected by their decisions. Direct action and civil disobedience have a proud history in movements for social justice, from the suffragettes and 8-hour-day movements to the anti-Vietnam war and Civil Rights struggles of the 1960s.

We need to defend our ability to organise, protest and resist – Drop the charges now!