At the sharp end of Pacific art 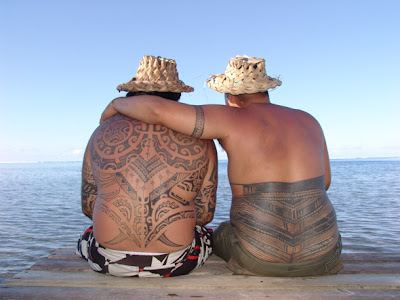 The Living Art of Pacific Tattooexhibition, on until September 8, is an interactive celebration of the ancient art of tattoo, with willing tattoo-recipients part of the show.

The exhibition - curated by Auckland-based photographer Steven Ball with work by New Zealand and Pacific-based photographers - has travelled to Amsterdam, Milan and Moorea, Tahiti, where it was showcased at the Tattoonesia Tattoo Convention in 2005.

With contributions by ethnologists, artists, anthropologists and local tattooists, the show documents Tatau and Ta Moko traditions in Pacific communities, explores hidden meanings behind the art form and how the ancient art still lives today.

"The exhibition is a celebration of the pacific, of different cultures, tradition and tattoo as a beautiful art form," Steven said.

That's the perspective artist and curator Steven Ball is trying to put across in The Living Art of Pacific Tattoo, images of ta moko by nine photographers.

The exhibition has been to Tahiti, Milan, Amsterdam, London, Auckland and Whakatane - and it's now on show in Napier.

Mr Ball says the blending of cultures in New Zealand can be seen in the ink.

“There quite a lot of bicultural people, part-Maori, part-Samoan, part-Tongan, part-English, part-European, whatever, and I think a lot of those styles are getting mixed up and a lot of crossover is happening and I find that exciting because it totally represents where we are now,” Mr Ball says.