Fighting and organising globally against neoliberalism! 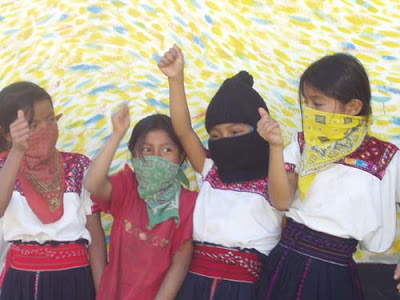 A global call for participation

We call on all activists, organisations and communities who are
committed to building a better world to join together at the Latin
American and Asia Pacific International Solidarity Forum to be held in
October 2007, in Melbourne Australia.

The forum has been initiated by the organisers of several successful
conferences and gatherings in solidarity with Latin America and the
Asia Pacific, the Australia-Venezuela Solidarity Network (AVSN), Asia
Pacific International Solidarity Conference (APISC) and the Latin
American Solidarity Network (LASNET). With this call we would like to
invite you to participate in this international forum.

A time of resistance, progress and struggle

Today, cracks are beginning to appear in the neo-liberal capitalist
ruling system. In the Asia-Pacific there is a growing crisis of
legitimacy for neo-liberal governments and mass movements of
resistance are on the rise. In Latin American a people's rebellion is
growing across the continent. An echo of the massive independence
struggles against colonialism and imperialism can again be heard.

Old ideas are being re-examined and new ways experimented with.
Discussion and debate have been revived among whole communities -- on
issues such as workers' control and management; indigenous autonomy
and self-determination; building trade unions and social movements;
electoral campaigning and counter-power strategies. These discussions
have given birth to some of the most dynamic and successful social
movements and political organisations in recent decades.

There is great diversity among these movements. Some are working to
achieve power, while others, such as the Zapatistas, aim to completely
re-define and recreate the notion of power. Some have formed links
with political parties and are constantly adjusting how they relate to
the government of the day.

Popular governments have won elections with the support of social
movements, and in countries such as Venezuela, Bolivia and Ecuador we
are seeing progressive and radical changes. The Venezuelan idea of
socialism for the 21st century is giving renewed hope and energy to
other liberation processes.

Another world can only be realised if people like you and me also
commit to this emerging project of struggle against neoliberalism.