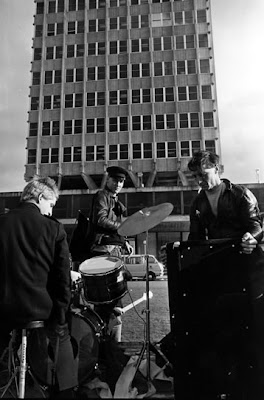 Anarchy in the Hutt Valley

Avalon television studios, at that time the nerve centre for local television, faced an unusual protest in 1982 over the alleged banning of a New Zealand music video.

One Thursday in July, staff rushed to the window to see punk rockers Riot 111 playing on the back of a truck, powering their home-grown buzz-saw sound with a generator.

The Wellington-based band were protesting Television New Zealand's (TVNZ) refusal to screen the video clip for their single 'Writing on the wall' on Radio with pictures, the only locally broadcast video show. The song included the line ‘You’re all waiting for 1984, but we all know it’s here’.

Featuring images of clashes between police and protestors during the 1981 Springbok rugby tour of New Zealand, the video was rejected for its ‘inference and recreation of police violence’. Riot 111 called the decision ‘stupid and dangerous censorship’.

As the band blazed away at high volume at the front of the Avalon studios, staff lobbed toilet rolls from upstairs windows. Punk supporters painted ‘Remember Riot 111’ in blue across the front lawn and hoisted the A for Anarchy banner on the flagpole.

Riot 111 had been closely involved with the Springbok tour protests. Their first single, '1981', borrowed from the famous 'Ka mate' haka and the 'Amandla' (Freedom) chant universally adopted by local tour marchers.

The band did its own recordings. Like those of other garage bands of the day, the quality wasn't the best. After the Avalon protest made the front page of Wellington newspaper the Dominion, TVNZ's head of entertainment said he would have screened the clip ‘if the music and sound recording had been of a higher standard’. 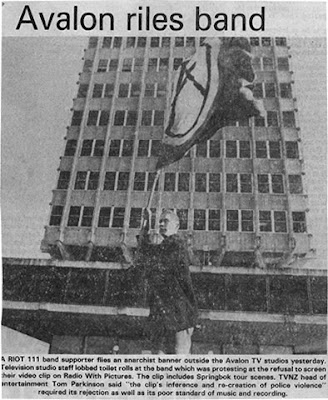 RIOT 111 was a New Zealand political punk band active from 1981 to 1984 often associated with anarcho-punk. The group was formed by two political activists, singer "Void" and drummer "Roger Riot", during the South Africa national rugby union team's infamous 1981 tour of New Zealand. The members of Riot 111 were Brown Squad protesters who were involved in running battles with the police's Red Squad outside the apartheid South African rugby games.

Void and Roger Riot recorded with guitarist Nick Swan and bassist Mark Crawford and their first song "1981" was based on the Haka of the All Blacks. It became an instant hit rising to eighteen in the national charts. This required the band to perform live, something they had not yet done. One of their first performances, in Wellington, caused a riot at Victoria University. This caused them to be banned from playing any commercial venues and forced the band to hire small school halls. Void was constantly attacked on stage by girls who would strip him of his clothes and left him to perform semi nude.

International touring acts asked Riot 111 to support them at New Zealand concerts, and through 1982 they played with The Birthday Party , John Cooper Clark and The Dead Kennedys. Jello Biafra wrote extensively about Void in US punk fanzines as an icon of anti-music imperialism. Riot 111 was one of the first bands to express Oceania indigenous culture through alternative post-punk rock 'n' roll rebellion.

Riot 111's EP Subversive Radicals was released in 1981. A music clip had been created to go with one of the EP's tracks, "Writing on the Wall", but it was refused airplay by state television on the only music channel. The band publicly protested the decision outside Television New Zealand's studio in the Hutt Valley.[1]

Subversive Radicals was followed by a tour of the South Island with a band called The First XV. This resulted in four of the eight tour members being arrested in Christchurch on the first day of arrival. They were also involved in a street battle with police outside The Star and Garter hotel which caused the closure the hotel for the year and led to more banning of the band. Such trouble with the police proved to be one factor that caused the band to fall apart. Other factors included continued violence from skinheads, the replacement of bassist Mark Crawford with Tim Ord, and a close friendship with Neil Roberts, an anarchist who died in an attempt to bomb a police computer database building.