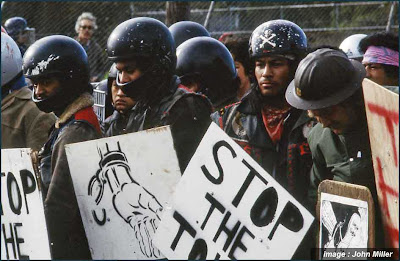 Barbed Wire and Barricades
When it All Kicked off in Kiwi

"The dead are marching again, they have new bones to contend, we must be their spirit, give them voice, put prints on these streets no street will ever forget. The rot in the human heart, we're up against it again. Out friends, out to these damned streets again!"

Sometimes on demonstrations and actions we have to think quickly, act on initiative and respond swiftly to what the police or security do. Learning about how these things have worked in the past can help us to make the right decision when it matters. Protesters against the 1981 Springbok tour of New Zealand learnt quickly. They were attempting to stop a tour of the country by the apartheid-era South African rugby team. The NZ government initially budgeted $2.7m for the unimaginatively-named 'Operation Rugby', the aim of which was to push the tour through despite massive public opposition.

The protesters rapidly developed and over the course of a few weeks, what had been a largely pacifist show of passive resistance turned into a co-ordinated and well trained 'army': "The Sunday afternoon strollers became tightly-linked platoons. Their clothing changed. Photos of the Gisborne protest during the 'days of innocence' show balaclavas instead of helmets. Padding and plastic armour were unknown then, they now became the order of the day, together with plywood shields, grappling hooks and other paraphernalia of mediæval war." The protesters linked arms in close-packed ten-by-ten blocks armed with motorcycle helmets, protective padding, home-made shields, smoke bombs and orange boating flares.

The protesters were confronted with the largest show of police power they had ever experienced. This was the first time riot police, with their long batons, shields and visors had ever been seen in New Zealand. Central to the cops' strategy was the new long side-handled baton, of which they had bought 5,000. Army veterans from Vietnam trained the cops in military camps in preparation for the tour. There was army and Royal New Zealand Air Force support for the police operation: Hercules transport planes were used to move the police about and the army engineering corps laid miles of barbed wire both inside and outside the rugby grounds. The cops used sheep trucks, freight containers and huge dumpster bins full of sand as barricades around the besieged rugby grounds. After protesters learned how to get through barbed wire, they started guarding the wire with cops armed with slashers, "which were said to deal with ropes and grappling hooks".

Confronted with this display of force the protesters had to develop quickly: "Steel helmets and face masks were fitted, moulded plastic and padding of every kind was taped to limbs and torsos... for days before, volunteers had manned production lines which turned out hundreds of plywood shields and thousands of chest protectors made from cardboard tubing."

As well as this straight-forward physical protection, disciplined organisation and training also paid off. The big demos drew 8,000-10,000 people who were organised in squads, or battalions with names like Tutu, Patu and Biko - each had different tasks like blocking motorway approaches or the streets around the rugby ground. One woman said: "We stopped at one point and practised movements. We learnt to retreat backwards without crushing the people behind us. We learnt to stop quickly so the people leading would not be forced into a baton line by the momentum of those behind. We learnt to divide down the middle and jog in lines with our arms linked."

Each group knew where all the other groups were, what they were doing and when thanks to CB radio in cars, all linked to a central HQ manned by the chief marshal. Each member of every squad was issued with an instruction leaflet and map setting out the squad's main plan, fall back plan, retreat position and location of safe houses. When the time came for action bits of paper were passed down the ranks saying there was going to be direct action, those who didn't want to be involved should move to the rear and when the three whistles sound you should run. "They were like parade ground troops" said one police sergeant.


The monitoring and jamming of police radios became routine and the protesters also used spotters up trees with radio contact to look out for the police. There were volunteer medical teams attached to each squad. During the final confrontation of the tour protesters used marine distress flares, smoke bombs and paint bombs. They also came up with the innovative tactic of throwing a fishing net over the riot police to give them time to cut through a chain between the jumbo bin barricades with bolt cutters.

Over the course of a few weeks a passive and fairly symbolic resistance to the tour was transformed into a much more prepared and organised, although still non-violent, resistance. One of the main organisers stated - "This proved to be a politicising experience for many moderates who now found themselves close to a police line for the first time in their lives."

You might well wonder what is the point of recounting all the ins and outs of a battle that took place on the other side of the world nearly 20 years ago. This may all seem like ancient history but it is a little-known and unexpected bit of our heritage that demonstrates some important points. Most importantly, it shows a transformation taking place over the course of a few weeks as people learnt from experience. Something we have seen in this country but on a much more drawn-out time scale.

Also, despite all this organisation and militancy the protesters almost entirely maintained a non-violent position, resulting in some horrific injuries - people quite willingly being beaten to shit in order to gain the 'moral high ground'. People were batoned unconscious by the police and some needed surgery afterwards. Many were hospitalised and put into intensive care - a bit of violence would have saved an awful lot of heads. The "leaders constantly appealed against [violence] and marshals removed anyone who had anything remotely like a missile or a weapon". One of these leaders stated: "There were enough of us on Saturday to totally overrun the police - batons and all - if we'd believed in violence. We didn't."

However, despite this it is clear that there are perhaps other lessons that we can learn from this and similar episodes elsewhere. Straightforward practical measures that could be adopted. Shields and helmets, colour-coded 'battalions', medics being attached to each squad, learning how to act and move as a group, throwing big fishing nets over the cops... (!?!)


Merata Mita’s Patu! is a startling documentary record of the mass civil disobedience that took place throughout New Zealand during the winter of 1981, in protest against a South African rugby tour. Testament to the courage and faith of both the filmmakers and marchers, Patu! is a landmark in New Zealand's film history. It staunchly contradicts claims by author Gordon McLauchlan a couple of years earlier that New Zealanders were "a passionless people".

This is really interesting, is this the closest NZ has ever been to civil war?