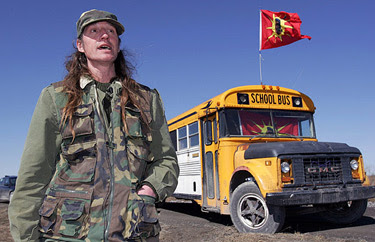 The judge ruled that if released, Brant would pose a threat to public safety.

Brant, 43, had been granted bail twice before in recent months, but breached conditions of his release when he took part in protests on the Canada Day weekend.

He was charged with mischief and breach of bail conditions.

About 60 of Brant's supporters, a handful of them dressed in military fatigues, were in the courtroom to watch the hearing.

Earlier, Brant's lawyers had said his respect for his mother would keep him from breaching his bail conditions and engaging in unlawful protest.

Brant's mother had offered a $50,000 surety and pledged to keep an eye on her son and report him to police should he breach his bail conditions.

Last week, Tyendinaga Mohawk activist Shawn Brant surrendered to Ontario Provincial Police at Napanee, fulfilling a promise he made during the June 21st National Aboriginal Day of Action, and clearly establishing himself as a great leader.

By negotiating his own surrender, Brant kept the confrontation between his supporters and police from turning violent. By standing his ground against the theft of his people’s land, he’s done more to draw attention to injustice against aboriginal Canadians than all the speeches of all the Grand Chiefs of all time.

The Tyendinaga Mohawks fought on the side of the British during the American War of Independence, under the leadership of Tyendinaga, also known as Joseph Brant. In 1793, in recognition of that service, the Crown signed Treaty 31/2, ceding a parcel of land on the Bay of Quinte to the Mohawks. In 1832, a later government illegally sold off a large chunk of that land, called the Cuthbertson Tract.

The Cuthbertson Tract is Mohawk Land. There is no reasonable legal dispute about this, but 175 years later, the Tyendinaga are still negotiating to get it back. It’s the same old story: on Mohawk land, Secwempec land, Tlingit land, while the federal government drags its feet over land claims, the Province parcels the land out to developers.

Shawn Brant and a group of followers ran afoul of the law when they blockaded a quarry on disputed Mohawk land. Before negotiations began with the federal government, the quarry operator was licensed to haul away 20,000 tonnes of Mohawk land a year. After negotiations began, Ontario increased that annual limit to 180,000 tonnes.

Brant also moved to block a luxury gated community that was to be built on the Cuthbertson Tract. To push his demands for a cessation of development on disputed lands, he blockaded the railway line that runs through Tyendinaga territory.

In the lead-up to the Day of Action, Brant told a meeting of the Ontario Coalition Against Poverty what he had been telling frustrated First Nations people for years: “It’s irrelevant if you carry a sign and march down the road.” If you want to get action, he said, “Go stand out in the road.”

Hold a peaceful march and the same political opportunists who’ve been slashing programs and giving away your land will come out and march along to “show solidarity”. Blockade the 401, and the media will come looking for stories. When the reporters come to ask Shawn Brant why his battered school bus is causing “economic hardship” by holding up traffic, he tells them.

He tells them that the rails and the roads cross Indian Country because the land is cheap, because settlers wouldn’t tolerate them in their backyards, and because nobody gives a damn what happens to the reserves. He tells them that blockades work where placard-waving doesn’t. He tells them freely that his people aren’t seeking violence, but that if the police come shooting, they’d better be prepared for a fight.

Canadians don’t often crown a living hero, and when we do, they’re seldom rebels. We’re more apt to choose uncontroversial symbols: Terry Fox springs to mind, the one-legged runner adored from coast to coast for his courage and determination, and his fight against cancer. Shawn Brant is a different kind of hero, but he’s every bit as brave and determined, and his cause is every bit as just.

Some day we will grow up as a nation. We will atone for our crimes, repay our debts. We’ll stop building ski resorts on stolen land and putting golf courses on burial grounds.

Some day Shawn Brant’s head will be on a Canadian postage stamp. We’re great at recognizing rebel leaders after they’re dead. Tonight, denied bail, he rests his head on a jailhouse bunk, a Canadian hero who gave up his freedom and risked his life for justice.