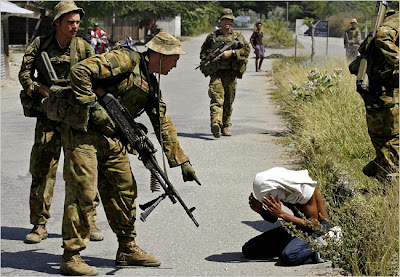 All these anzac pigs can fuck off out of the Pacific......Haere Atu Poaka

Riots have broken out in East Timor's two largest cities, as opponents of new Prime Minister Xanana Gusmao confront Anzac police and soldiers. Gusmao's National Congress for Timorese Reconstruction party won only 22% of the vote in last month's parliamentary elections, trailing behind its rival Fretilin. Gusmao has been able to take power this week because of the intervention of his close ally, President Jose Ramos-Horta, who invoked a clause in East Timor's constitution that gave him the power to decree a government. 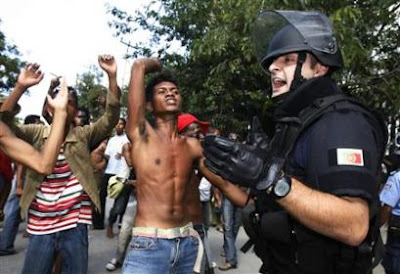 Fretilin activists have been outraged by Horta's act, insisting that their party has the right to form an administration because it won the largest share of the vote and the largest number of seats in parliament. Fretilin leader and former Prime Minister Mari Alkatiri told the Sydney Morning Herald that 'People are really frustrated…they voted for Fretilin, expecting Fretilin to govern the country and suddenly with some kind of interpretation of the constitution, the second party was invited in'.

The riots began after protesters in the capital Dili and the eastern town of Bacau were confronted by Australian and New Zealand soldiers and police. Refusing orders to disperse, the protesters, who chanted 'Down with John Howard!' and held banners denouncing Horta as an Australian puppet, built barricades of burning tyres and threw rocks at police and soldiers. Australian troops opened fire after youths smashed the windows of their vehicle near the pro-Fretilin Comoro refugee camp on the outskirts of Dili. The camp has been a centre of anti-occupation protest since Australian troops shot and killed two of its residents on February the 22nd. The Australian embassy was targeted by rock throwers, and in Bacau a building associated with the UN was burnt down. Protesters attacked New Zealand army vehicles in both cities. 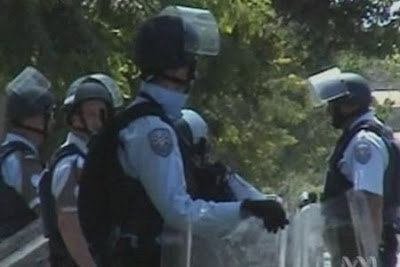 It is not surprising that protesters have chosen to express their anger at Gusmao's illegitimate government by attacking Anzac forces and property. For more than a year now, John Howard's administration has been flagrantly interfering in Timorese affairs on behalf of its close allies Gusmao and Horta. In the first half of 2006 Howard's government waged a campaign to destabilise the Fretilin-dominated government of Alkatiri by splitting the army and police forces, funding anti-secular demonstrations by the country's powerful Catholic church, and spreading anti-Muslim and anti-communist smears against Alkatiri. The result was a wave of violence which was used to pressure Fretilin into agreeing to the deployment of an Anzac 'peacekeeping force' of soldiers and police. 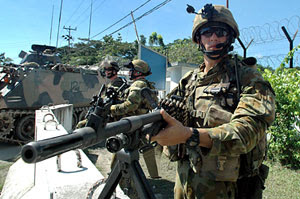 Howard used the occupying force to secure Alkatiri's resignation, and to make Horta temporary Prime Minister in his place. In response, Horta lavishly praised Australian and American foreign policy and took a much more conciliatory attitude to plans to expand Australian exploitation of oil fields in the Timor Gap. But political and social stability proved hard to restore, and last February and March riots shook Dili in response to the killings of Timorese civilians by Anzac troops who had been deployed against Horta's enemies. During this year's Presidential and parliamentary elections, Anzac troops were often used to bully Fretilin opponents of Horta and Gusmao. When John Howard visited Dili at the end of July to give his support to a Gusmao government he was met by protesters demanding an end to the Anzac presence in their country. The new uprising in Dili and Bacau only proves how widespread opposition to the occupation has become.

On the Eve of a Free Trade Area of the Pacific: Occupation, neo-colonialism and enclosure