A call for shared intent against the violence of APEC 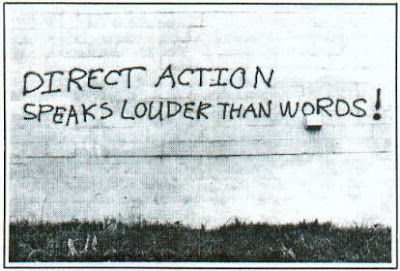 The Asia Pacific Economic Co-operation (APEC) is a forum where heads of governments in the Asia Pacific region, will meet to discuss economic and military strategies that will benefit ruling powers in the region. APEC heads of state will arrive in Sydney on Friday 7th and meet Saturday 8th September at the Opera House and Sunday 9th
September at Government House.

In Australia, the policies of APEC have resulted in the privatisation and degradation of public transport, low wages, de-unionisation of workplaces, high cost housing, an elitist
education system, increased military funding at the expense of education and health, and the lack of prevention of climate change.

As a colonial power in the Asia Pacific region, the Australian government has a direct interest in implementing these policies. In Papua New Guinea, East Timor, the Solomon Islands and elsewhere,
Australian companies profit, with military enforcement, from the privatisation of public assets, the displacement of local indigenous peoples and environmental degradation.

These policies create situations whereby people have a right to respond with anger. Governments can only maintain the legitimacy of such policies by maintaining an image of social control and demonising protest by committing millions of taxpayers' dollars to surveillance, repression and violence. But we are fighting for a better world.

The people who speak out against the repression of APEC will attend the protest as individuals on their terms. But with shared intent,
good communication and collective organisation, we can participate in mass direct action that is both meaningful and strategic. This can send a strong message against the poverty and violence imposed
by APEC's policies. It is important that we stay safe and minimise the repercussions of police repression in our families and communities.

We invite local community groups, individuals, unions and others to work with us and communicate with us before the event to develop a shared intent. A number of direct action training sessions will take place in Sydney and Melbourne to prepare for a mass, strategic intervention to the APEC meeting. We also support and hope to work
alongside others taking action in whatever way they see fit.

By the very praxis of stepping out and challenging their control of space we are committing what is regarded as a violent act. It is the violence of articulating resistance; it is a violation against
their understanding of our lives.

We want to act together with an approach that is empowering, strategic and fun. We want to use their borders against them. Our proposal is to disrupt their meeting by disrupting their control of the space, to challenge the exclusivity of their politics. We want together as a mobile obstruction and where we see a border silence
us, we challenge them, we turn their zones into the political forum we want to have. We make it known that we don't agree and we are not going to live in fear.

A call for direct action at the anti- APEC protests will be big news in Sydney. But will people join us? Only if we can successfully delegitimise APEC, give people hope that disruption is possible, communicate powerfully why they should participate and most importantly counter the huge fear campaign which the state has
rolled out against the people of Sydney.

This is a statement of our intent to disrupt the APEC conference, because we believe it promotes exploitation, inequality and the destruction of the planet. We are dreaming up ways to disrupt the
conference whilst communicating our deeply held convictions against capitalism and the authoritarian state, and our belief that another
world is possible. We call out to others to join us in planning creative, strategic disruptions, and to plan your own actions of disruption.