Tjimba and the Yung Warriors The Yung Warriors have been nominated for a deadly award.

They have been strident supporters of Self determination and the sacred fire.

Those of you who went to the second Aniv. of Camp Sovereingty will remember the electrifying performance they put on for us; those who didn't can look forward to a great show at the third Aniv.

In the meantime give them a vote and lets see them get the credit they deserve for their hard work.


Be Deadly and VOTE YUNG!


Hip Hop Crew the Tjimba and the Yung Warriors have been nominated for the leading indigenous DEADLY AWARD for BAND OF THE YEAR.

Voting has opened and fans and supporters can get on and vote online now for awards that will be presented on October 9th at the Sydney Opera House. Voting online details are on
Vote here

Tjimba and the Yung Warriors are one of four nominations this year in what looks like being a new high water mark for indigenous achievements in the Arts and Sports as measured by the internationally recognised prize ‘The Deadlies’.

Yung Warriors Tjimba and Narjic and Danny said ‘we are just so proud to have our nomination accepted, especially as ‘Band of the Year’ because that’s already a reward for all the live shows we did and recognition for our first album.

‘Its an honour to be up there in a category with our Uncles and Aunties in the Black Arm Band and our mates in the Street Warriors and Max Judo. If we win then that’s a win for our generation continue the work of our musical elders.

The Yung Warriors sing ‘there’s always something good out there’ and to ‘hold your head up and things will get better’ and there has been a huge demands for their shows and workshops by indigenous youth all over Australia.

They have performed continuously for their communities both in town and regionally. This included inspiring shows in Lake Tyers Community, Tarerer Festival in Warnambool, Yorta Yorta communities on the Murray and Wathaurong Community in Geelong.

As well as crossing over into wider audiences at the Big Day Out and playing for clubbers in the Melbourne nightclub scene the Yung Warriors achieved an aim by playing a support spot for international act and hero 50 Cent. To cap it off they played an intro at the Anthony Mundine world title fight.

Tjimba and the Yung Warriors debut CD the ‘Warrior for Life’ has been album of the week at most indigenous radio stations around the country. Hip Hop journalists have described the album as one of the best Australian Hip Hop albums in 20 years. The recordings feature all original beats and the three guys also play all the instruments themselves. 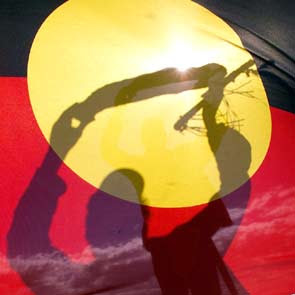