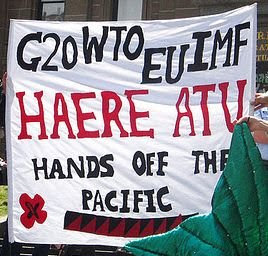 Australia has been accused of trying to fast-track new free trade negotiations with Pacific Island countries at a recent regional trade ministers' meeting in the Cook Islands.

Trade officials from the Pacific leaked details of the meeting to the Pacific Network on
Globalisation (PANG) because they were outraged that an Australian trade delegation had tried to bully Pacific ministers to fast-track work on a new free trade agreement (FTA), said PANG coordinator Maureen Penjueli, who is based in Fiji.

She said the Australian government tried to secure agreement on which areas would be included under any FTA negotiations, and begin formalizing the negotiating process.

"They know very well that Pacific countries are not ready to start any negotiations," said Penjueli. "We are still negotiating a controversial FTA with the European Union, and a regional trade deal among ourselves. We haven't even begun to prepare our regional negotiating framework, or undertake social impact assessments, or reviews of Pacific legislation that could be affected by a new FTA with Australia and New Zealand."

She said the Australians were attempting to set the terms of negotiations.

Pacific trade ministers reportedly want to establish an office of a Chief Trade Advisor, potentially to be based in Port Vila, Vanuatu, before any PACER-Plus negotiations get under way.

Penjueli said Australia and NZ were not interested in supporting a strong regional negotiating team.

"Negotiations haven't even begun, and the Australians are splitting the region, by refusing to support a regional negotiating office, and by holding out carrots — like new workers' schemes — to gain support from individual Pacific countries," said Penjueli.

"It would be unfortunate if Australia and NZ were to use their position as key aid donor countries for the region, to secure their own trade interests in any FTA negotiations."

Australia and NZ are keen to pursue a FTA with 14 Pacific Island Countries as part of the Pacific Agreement on Closer Economic Relations (PACER). The FTA is being called PACER-Plus.

Both countries stand to gain hundreds of millions of dollars in increased exports, but there are concerns the Pacific nations will be hurt by free trade with their big brother neighbors, she said.

Penjueli said churches, unions and civil society organizations in the Pacific were concerned that pursuing an FTA with Australia and NZ would lead to rising inequality, losses in government revenue, job losses, a reduction in the quality and supply of essential services and the closing off of policy space that governments use to stimulate development.

"We need to use international trade to enhance our development opportunities in the Pacific," said Penjueli. "The Australians are pressuring us to open all our markets to competition and to reduce our ability to stimulate local firms and service suppliers, or to channel foreign investments toward local industry and employment.

"Pressure to liberalize according to timeframes and frameworks promoted by Australia and NZ makes a complete mockery of the calls for good governance in the Pacific."
Posted by Ana at 14:24