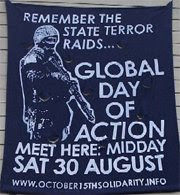 Solidarity in the Kulin Nations

Global Day of Action Saturday 30th August 2008
We demand the unconditional freedom of the people who are facing charges as a result of the state terror raids on 15 October 2007.

Attempts by the Police to lay charges under the Terrorism Suppression Act (TSA) failed but people are still facing politically motivated charges under the Arms Act. These charges are the result of a racist operation.

Police used the Terrorism Suppression Act and over $8 million to harass and punish political activists who they saw as supporting Tino Rangatiratanga.

The Police have arrested a few people but we're all targeted. The arrests of 15 October are aimed at intimidating and frightening all of our communities and cannot be tolerated.

We therefore call on everyone to stand up against this attack on our communities. We support the global day of action on 30 August 2008 and are mobilising to demand the unconditional freedom of the people facing charges as a result of the state terror raids.

Brought to you by LASNET & In solidarity with Oaxaca Political prisoners 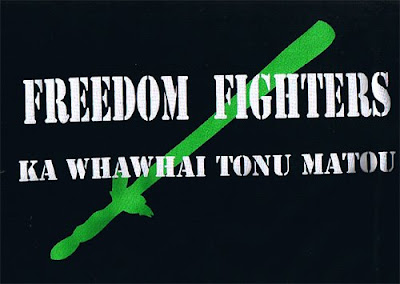