8 am:Listen in to 3CR (855 on your am dial) when Marisa Sposaro will interview Lex on the Brekky Show.

11 am: Hear Lex in conversation with Robbie Thorpe on 3CR’s Fire First.

6.15 pm: Lex will speak at a meeting of the Darebin Greens, Preston Neighborhood House, 218 High Street, Preston. All welcome.

8 pm: Lex will be a guest on 3CR’s Tamil program. Here Lex discuss the issues with interviewers from another oppressed nation!

am: Tune in to Solidarity Breakfast on 3CR and hear Carlene Wilson and Michelle Reeves interview Lex.

7 pm: Don’t miss the Lex Wotton Solidarity Fiesta at the MUA Auditorium, 54 Ireland Street, West Melbourne. Lex will speak at 8 pm. Be there for a great evening of music and solidarity!

The Long Grass Sessions on radio 3RRR, which runs from 9 am – noon will feature Nicole Findlay interviewing Lex Wotton.Need more info: call Cheryl on 0401 806 331 or
e-mail Alison on alison.thorne@ozemail.com.au 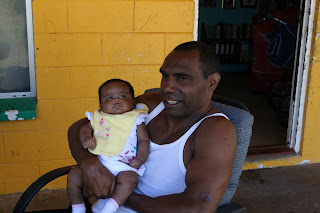 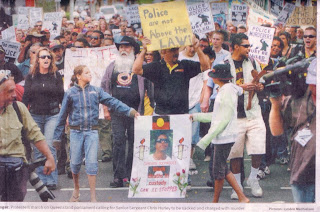 Australian Racism - A Case Study - Palm Island 2004 - 2006
For those interested in the manner in which institutionalised racism functions in the Australian context, one need look no further than the case of the death of an Aboriginal man on Palm Island, the historically notorious QLD Government 'punishment camp' under the old QLD 'apartheid system'.

The death of Mulrunji Doomadgee at the hands of a QLD Police officer led to a riot and a subsequent 'comedy of errors' as the Beattie Labor Government struggled to contain the political damage at the same time as maintaining an apologetic approach to the powerful QLD Police union.

The unmentioned 'elephant in the room' was the long entrenched culture of racism that permeates QLD society and politics.

It is in that context you might read this index of the history of the recent events on Palm Island, as seen through the prism of the sometimes questionable newspaper coverage by Australian media.

This chronological index nevertheless provides an interesting history of how this issue became a major crisis largely through the political ineptitude displayed by the Beattie Government over a protracted period between 2004 and 2006.

The saga continues to unfold and future episodes will be incorporated into this index
http://www.kooriweb.org/foley/news/2006/palm/palmindex.html

The campaign to throw out all charges against Palm Island Aboriginal leader, Lex Wotton, is gaining momentum. The Indigenous Social Justice Association (Melbourne) is organising a Victorian speaking tour for Lex from 6 – 10 August 2008.

Wotton participated in the November 2004 protest against the killing of his friend Mulrunji, a respected community member and father, while in police custody. Singled out in the crackdown that followed, Wotton faces charges of “riot with destruction” -- a charge that could lead to a jail sentence of more than ten years.

No justice, no peace. A blatant cover up of what happened to Mulrunji in the Palm Island watch house enraged the community. Responding to years of racist state violence, and now Mulrunji’s death, they demanded justice. What triggered the angry protest was the release of the first state inquiry into Mulrunji’s killing, which, while noting that he had suffered a ruptured liver and four broken ribs, concluded that his death resulted from a “scuffle.” A second coronial inquiry in September 2006 confirmed what everyone already knew: that on November 19, 2004 at the Palm Island police station, Senior Sergeant Chris Hurley had struck Mulrunji with such force that it caused the Aboriginal man to die.

Four hundred people took part in the 2004 Palm Island rebellion -- over 10% of the entire island’s population! The large demonstration marched on the police station and courthouse -- the symbols of racist injustice. Queensland authorities retaliated with vicious repression and targeted individuals for persecution. On March 22, 2007 a jury acquitted four Palm islanders charged with “riot” in connection with the November 2004 demonstration. But the state continues to scapegoat Lex Wotton, whom they allege was the leader of the protest.

Far from being a “riot,” the Palm Island protest was an act of anti-racist resistance. This struggle, like that of Redfern after the death of T.J. Hickey nine months earlier, brought the racist hounding of Indigenous communities across Australia to international prominence. The resistance on Palm Island revitalised a national movement to expose the causes of Aboriginal deaths in custody and stop the ongoing death toll that amounts to genocide. This resistance is a big factor in why Senior Sargent Chris Hurley was brought to court. His acquittal once again confirmed how stacked the legal system is against Aboriginal Australians and how justified it was for the people of Palm Island to stand up to the institutions of this racist system in November 2004.

We will not be intimidated! By jailing Lex Wotton, the state hopes to head off future opposition to racist persecution. The Queensland government is trying to scare people away from responding to the whitewash of Mulrunji’s killing and resisting Canberra’s draconian invasion of Northern Territory Aboriginal communities.

This subjugation of Indigenous Australians is another form of the repression being unleashed against trade unionists who stand up for workers’ rights. The Australian Building Construction Commission has spied on, intimidated and threatened to imprison several building workers for organising strikes and other resistance against exploitation.

Supporters are organising solidarity action all around the county in the lead-up to Wotton’s trial. We demand: Stop the Racist Political Persecution of a Palm Island Aboriginal Resident! Defend the Right to Oppose Racist State Brutality! Drop the Charges Against Lex Wotton!

We have only a few months before Lex faces court and charges that, if upheld, could see him jailed. A preliminary court hearing moved the date of the trial from April 21 to October 6. A huge national solidarity convergence will take place in Brisbane in the lead up to the new trial date.
In August, ISJA-Melb is organising this Victorian speaking tour for Lex Wotton to tell his story and further strengthen the campaign. Wotton will address unions, workplace meetings, campus events, media and community gatherings. A huge benefit evening featuring a speech by Lex and an array of performers donating their talents will take place on Saturday 9 August at the MUA Hall in West Melbourne. To propose a speaking opportunity for Lex or to contribute to the success of this solidarity speaking tour, contact ISJA-Melb on 9388-0062 or 0401-806-331

The Queensland government continues to urge Aboriginal people and their supporters to have faith in a system which acquits Senior Sargent Hurley but threatens to jail Lex Wotton for at least 10 years. The “justice” system exists to protect the rich and the powerful. It is a system where, to quote legendary singer songwriter, Kev Carmody, Aboriginal people can be “executed without trial” while held in custody. It is a system that hunts down opponents of racism, like Wotton, who protest against this injustice. We demand Lex Wotton’s freedom, now!
Posted by Ana at 17:25

enough is enough. Aboriginal deaths in custody are Aboriginal murders in custody so why hasn't there ever been any charges laid against those responsible for these loss of lives - how many have there been? Hundreds - and the green light is still there for everyone to see that genocide is allowed to happen and condoned by a rotten, racist system that says a black life is worth less than a white life. if a white cop was killed there'd be no stone left unturned till there was someone incarcerated for taking that life but Palm Island residents protested after the cover-up that occurred after Mulrunji Doomadgee's life was taken and what happens? Lex Wotton is one of those illegally arrested (Qld. Crime & Misconduct Commission found that this was the case) and he is still scheduled to go to trial on the 6th October while Qld. police officer Snr. Sgt. C. Hurley keeps his job and is paid by our taxes! How did Hurley get the job on Palm Island in the first place if he says he was not aware of the Recommendations of the Royal Commission into Aboriginal Deaths in Custody. If he had been aware of them there is no doubt that Mulrunji Doomadgee, his son, Eric, and witness Patrick Bramwell would still be enjoying life on Palm Island this very day! Shame Queensland shame & shame on all those involved in denying justice to Mulrunji & his family & shame on all those responsible for targeting Lex for being a human being who grieved for the loss of another human being's life.

Kia Ora and thank you for leaving a stanch and no bullshit comment, shame all right on the kkkops in queensland.