New Zealand the "War on Terror" & the Pacific 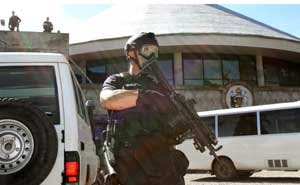 much appreciation and thanks to Val for this, an extract from her book :

Against Freedom: The war on terrorism in everyday NZ life

Clothed in benevolent, paternal words, greed and racism lie at the heart of the war on terrorism: pushing the West’s way of doing things onto the Paciﬁc. New Zealand seeks to gain access to markets in the Paciﬁc and to rich natural resources through liberalised trade

In 2003 Helen Clark hinted that New Zealand would be a willing agent to carry the war on terrorism to the Paciﬁc. Answering the call of George W Bush, Clark endorsed a range of counter-terrorism initiatives for Paciﬁc Island nations.1 New Zealand’s close links with many Paciﬁc Island countries places it strategically to implement the war agenda.

Ostensibly, war and development are opposites. War is destructive while development is liberally conceived of as being constructive and beneﬁcial. It would therefore appear contradictory that the war on terrorism is being sold to New Zealand’s Paciﬁc Island neighbours
as a development opportunity. There is a different view of development in which it is a largely self-interested undertaking by the donor country for both material and ideological gain. The evidence supporting this view is that a considerable portion of development aid money is spent in the country giving the aid, rather than the country giving the aid, receiving it. Seen in this light, the New Zealand government’s actions are not contradictory.

Fighting a so-called ‘Paciﬁc war on terror’ with development money, while spinning propaganda about high- minded development goals, makes perfect sense when you see it as an exercise in greedy self-interest. Our Paciﬁc neighbours are being shortchanged while we are led to believe our government is generous and altrustic. This is not to say that development aid cannot have beneﬁcial outcomes. It is more that any beneﬁcial outcomes must be viewed with the understanding that they are secondary to New Zealand’s interests.

How is New Zealand’s support for the war on terrorism speciﬁcally serving its own ends in the Paciﬁc and beyond? First, it is necessary to understand both New Zealand’s aims and some of the responses from the Paciﬁc. One part of this is an analysis of the cost of the war in the amount and type of development assistance New Zealand is giving to help carry out the goals of the agenda.

This includes what New Zealand is not doing in order to be able to continue the war. There are two poignant examples to illustrate this: the Regional Assistance Mission to the Solomon Islands and the deployment of military engineers to Iraq. The invasion of the Solomon Islands in
2003 is part of the agenda of the war clothed in development rhetoric. Beyond the Paciﬁc, the government has used the public perception of beneﬁcial development aid to mask the deployment of New Zealand Defence Force troops to Iraq in support of the occupying armies. New Zealand is aggressively pursuing the war agenda for its own self-interested gain, at the expense not only of real Paciﬁc needs, but of the very survival of these island states

Unlike the United States, New Zealand is not “an island unto its self.”2 Its written history is testament to the forces — both internal and external that have shaped and inﬂuenced its development as a player on the world stage.

New Zealand has a reputation for taking seriously its place in the Paciﬁc region. At times, New Zealand has acted on imperial ambitions; at other times, it has seemingly given practical, albeit self-interested, patronage. For example, as a result of signiﬁcant and sustained grassroots pressure on the issue of nuclear testing in the Paciﬁc, the New Zealand government has favoured the creation of a nuclear-free region in the South Paciﬁc. Similarly, the circumstances that lead to the 1987 declaration nuclear free were entirely as a result nuclear free were entirely as a result nuclear free of the work of people unafraid of confronting US military dominance in the region. Now, the United States is again demanding unwavering loyalty in its global war on terrorism. New Zealand is a part of the global community — the US is the only superpower. This New Zealand government is only too happy to acquiesce to its will and help export the war to the Paciﬁc.

The government sees the Paciﬁc as its sphere of inﬂuence, and it is keen to ensure that the US anti-terrorism agenda is being followed. From the ﬁrst Asia-Paciﬁc Economic Cooperation (APEC) meeting after 9/11, George W Bush has sought to deﬁne the war on terrorism in economic terms. In Shanghai, he intoned “Terrorists did not just attack the United States on September 11… they attacked the world and free trade.”4 At the most recent forum in Santiago, Chile, Bush again challenged his colleagues in pursuit of APEC’s main goals — trade and prosperity — to “do more to combat global terrorism.”

Bush’s press secretary Scott McClellan observed: “The big priorities will focus on the security and economic side because they really go hand in hand. You need to make sure you have security so that you can move forward on the economic side.”5

Given New Zealand’s lust for trade agreements, coupled with the relentless pressure from the US, even the pretence of meeting traditional development goals has been subsumed by the war. At present, the goal of eliminating poverty through the promotion of sustainable development appears to have been annihilated by the war on terrorism. The war in the Paciﬁc The war’s agenda in the Paciﬁc is advancing in two stages.

The ﬁrst aims to change the deﬁnition of development while retaining its good public image. Words such as ‘security’ and ‘good governance’ are part of the lexicon of the war. The second stage of the war advances fundamental economic and social changes which can broadly be described as neo-liberalism. This system advocates minimal state intervention in favour of market mechanisms in areas such as health, education and welfare. It includes the privatisation of public assets, unfettered foreign direct investment and capital ﬂow, and strict rules-based trading. Neo-liberalism has been called ‘capitalism with the gloves off’ because business forces are stronger and more aggressive, and face less organised opposition than ever before.6

The war on terrorism is being linked intimately with development through the need for ‘security’ and ‘good governance’. In this discourse, ‘security’ is deﬁned by the needs of Washington, Canberra and Wellington, not those of Paciﬁc Island nations. This is not ‘security’ that seeks to ensure adequate food, clothing and shelter for the residents of these island nations. Nor is it about addressing urgent environmental issues such as global climate change, coral reef destruction or ﬁsh-stock depletion that threaten the livelihoods and survival of hundreds of thousands of people. This is an imported deﬁnition of ‘security’ as a war against some nebulous threat of terrorism.

This deﬁnition of security translates to mean more military, more police, more restrictions on movement, more intelligence gathering, and harsh counter-terrorism laws in order to deter activities that hinder the war. Not surprisingly, the expenditure for these counter-terrorism measures is subtracted from New Zealand aid dollars ostensibly intended for basic needs to eliminate poverty through the promotion of sustainable development.

The term ‘good governance’ as sold to the New Zealand public means a government that is ﬁnancially accountable, has fair and transparent processes, consults with and is responsive to the populace, and makes information available to citizens. But this deﬁnition obscures the implicit directive to adopt a particular way of being — democracy deﬁned by free markets. As George W Bush interpreted the 9/11 assault, it was an attack on “the world and free markets.”

This is the second phase of the war, one in which democracy becomes the New World Order’s euphemism for neo-liberalism.8 Beneath the language of development, the true agenda of the war on terrorism is exposed. Clothed in benevolent, paternal words, greed and racism lie at the heart of the war on terrorism: pushing the West’s way of doing things onto the Paciﬁc. New Zealand seeks to gain access to markets in the Paciﬁc and to rich natural resources through liberalised trade. NZAID endorses a strategy of trade for the promotion of sustainable democratic development. Despite the environmental and economic vulnerability of most Paciﬁc Island states, NZAID is pursuing a so-called ‘development strategy’ that has the possibility of destabilising the entire economy of these nations. It is a development strategy designed to enhance the New Zealand economy, not the Paciﬁ c. It spends nearly $100 million on such
‘development’ in the Paciﬁ c while the government aggressively pursues a free-trade zone of six million Paciﬁc peoples that would be a signiﬁcant boost to New Zealand business.

Transparent rules-based trading is promoted as the great panacea for poverty in the Paciﬁ c. It belies the reality that most Paciﬁc nations have a narrow and homogeneous range of products for export.

They are reliant on remittances from abroad for hard currency, and in most cases practise subsistence agriculture. “As one NZ government official conﬁrmed with disarming frankness: when it comes to trade there is no ‘special relationship’ with the Paciﬁc. International trade strategy takes priority over the views of Paciﬁc governments and the needs of Paciﬁc peoples.”9 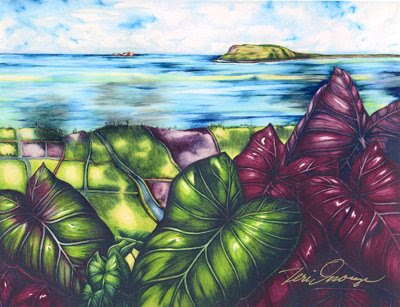