No Olympics on stolen land! ---- Disrupt and abolish the G8 and SPP

Active support and solidarity for local struggles of self-determination, justice and dignity
[August 2008 OTTAWA] ---- In the year 2010, three major international events will be taking place in the Canadian state: the Winter Olympics in Vancouver/Whistler (between February 12-28); the G8 Leader's Summit in Huntsville, Ontario (most likely in June or July); and the meeting of the NAFTA leaders as part of the so-called "Security and Prosperity Partnership (SPP)" (date and location not yet known). ---- Already, groups and individuals on the West Coast have come together under the banner of "No Olympics on stolen native land." They have been organizing and raising awareness, from an anti-colonial and anti-capitalist perspective, against the 2010 Olympics, for several years.

Inspired by the mobilizing on the West Coast, organizers across "Canada"have begun awareness-raising efforts. Building on the call from the West Coast for anti-capitalist and anti-colonial resistance to the Olympics, some organizers affiliated with the "People's Global Action" Bloc (PGA-Bloc) in Ontario and Quebec have begun mobilizing around "Resistance2010", linking
anti-Olympics efforts to organizing against the G8 and SPP, and the day-to-day systems and institutions of power and oppression they represent.

With more than one-year before the Olympics begin, there is a huge opportunity for coordinated and developed campaigns against the Olympics, G-8 and SPP: campaigns that are rooted in our every-day mobilizing, and survival; and campaigns that understand that the institutions of oppression and power function daily in our own communities. 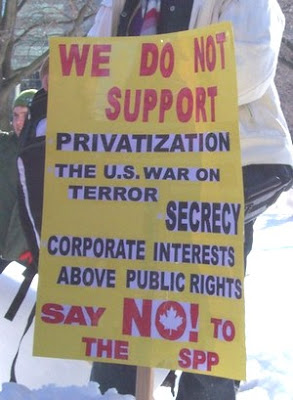 The PGA-Bloc is organizing within the framework of the People's Global Action Hallmarks, which are linked at: www.agp.org

The PGA Hallmarks are a common expression of some of our basic politics, and are linked to a loose international network of grassroots resistance to capitalism that is directly inspired by the Zapatistas. Over the past several years, the "PGA-Bloc" has been used in Ontario and Quebec for
various organizing efforts, such as opposing George Bush's visit to Ottawa (2004) and mobilizing against the SPP meeting in Montebello (2007). The PGA network is also linked to numerous groups who organized anti-capitalist resistance to the Summit of the Americas in Quebec City (2001).

Whether groups are organizing within the PGA Hallmarks or not, we would like to communicate and organize with everyone with shared affinities -- anti-capitalist and anti-colonial analysis; support for direct action;confrontation of oppressive systems; opposition to all forms of oppression;autonomous and horizontal organizing; and support of Indigenous sovereignty and self-determination -- in a spirit of unity, solidarity and mutual aid.

There have so far been two regional organizing meetings in Ottawa (in January and July 2008) related to the Resistance 2010 campaign, bringing together activists from Ontario and Quebec. Allies have been meeting in Halifax as well. A Resistance 2010 information session was held at the Montreal Anarchist Bookfair this past May, involving participants from Ontario, Quebec, the Maritimes as well as the Northeast USA. To date, there have been two visits by Indigenous organizers in "British Columbia" to Ontario and Quebec, and communications between organizers across "Canada".

This callout (our second; the first was made in January 2008) is being made to again encourage networking and communications between groups and individuals who support the Resistance 2010 campaign.

We write this in the hopes that we can re-kindle old networks, encourage and join new ones, and support each other's organizing and struggles towards 2010 and beyond.

In solidarity and in struggle,Members and supporters of the PGA-Bloc in Ontario and Quebec.

*ENDORSE RESISTANCE 2010:* We encourage groups and organizations to discuss
the Resistance 2010 campaign. If your group supports the main demands of Resistance 2010 campaign -- no Olympics on stolen land; disrupt and abolish the G8 and SPP; and active support and solidarity for local struggles of self-determination, justice and dignity ?- please get in touch to endorse the campaign at info@resistance2010.net

*SHARE INFORMATION:* Please share any public information about activities and campaigns that you've already begun or discussed in your area that might be related to the Resistance2010 effort. We are compiling the public information at info@resistance2010.net and will send it out on our announcements list to share with everyone.

*POPULAR EDUCATION:* We are particularly interested in sharing research and popular education materials. Members of the PGA-Bloc in Ontario and Quebec are working together in the coming months on a more detailed information package to share with your group, as well as more informational workshops. Please e-mail info@resistance2010.net to share any info.