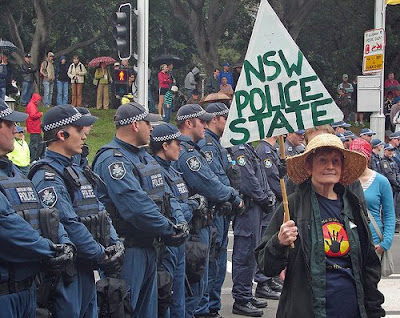 Congratulations to Marcela & thanks to Solidarity Online

In another victory for the right to protest, one of the few court convictions over the APEC demonstration was overturned on appeal yesterday in the District Court. In the face of the continuing attempts to ramp up police powers by the NSW government, last seen in the ridiculous World Youth Day anti-annoyance laws, this is a further sign that we can defend our right to dissent.

Marcela Olea challenged her conviction for assaulting a police officer during chaotic scenes following the unprovoked police arrests of two protesters on their APEC "black list". Under the APEC legislation police compiled a list of protesters who were banned from certain parts of the city. Despite never venturing into the "red zone" at any time, the two peace activists were arrested by police.

Marcela was cleared of her charge on the grounds of self defence: in fact she was trying to film the events for an independent media production and tried to protect her camera from police jostling as they were arresting and manhandling protesters.

Her victory was assisted by huge public sympathy for the APEC protest, with the judge conceding that the staging of APEC had been politically and financially controversial. The prosecution had tried to smear Marcela by pointing out she was there to protest not just to film, but this was rejected by the judgement — another recognition that the right to protest must be
preserved.

Marcela is thrilled to have beaten the charge after what had been a traumatic experience at the hands of the riot police. "This is a great day for civil liberties," she says.

The legitimacy of police anti-protest operations suffered a huge setback as a result of the heavy-handed police behaviour during the summit and the farce The Chaser team made of security arrangements. In a possible further humiliation, one of the blacklisted protesters is set to bring a case of wrongful arrest against the NSW police over the arrests which sparked the incident.

Anti Terrorism and the Criminalisation of Dissent-Lou Thatcher