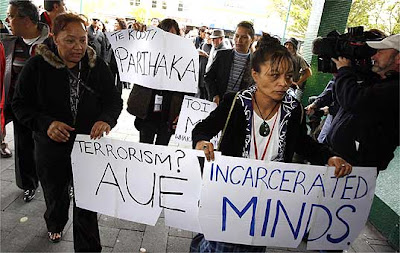 44. One of the more serious human rights protection deficiencies in recent years is the trend towards the use of laws and the justice system to penalize and criminalize social protest activities and legitimate demands made by indigenous organizations and movements in defence of their rights. Reports indicate that these tendencies appear in two guises: the application of emergency legislation such as anti-terrorist laws, and accusing social protesters of common misdemeanors (such as trespassing) to punish social protests. Examples from various parts of the world have come to the attention of the Special Rapporteur.

Rodolfo Stavenhagen, Report of the Special Rapporteur on the situation of human rights and fundamental freedoms of indigenous people (E/CN.4/2004/80), COMMISSION ON HUMAN RIGHTS, Sixtieth session, Item 15 of the provisional agenda, 26 January 2004, para. 4