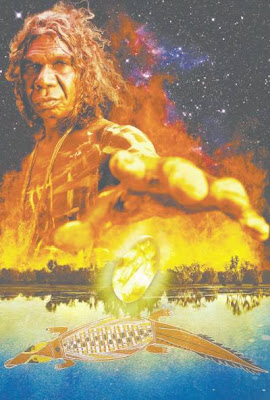 Crocodile Dreaming, starring David Gulpilil is one of the featured films at this weekend’s Wellington Aboriginal Film Festival. Artwork by Jeremy Saunders.

The second annual Wellington Aboriginal Film Festival is set to hit the big screen this weekend.

With the theme ‘Coming Together of the Spirit’, the festival has been organised by the Wellington Social Justice and Reconciliation Group and aims to break down social and racial prejudices.

“I mean, we are so familiar with immigrants such as Italians and Greeks but know so little about our own indigenous population.”

The exposure of Aboriginal traditions through the medium of film doubles as a celebration of culture.

“They are pure Aboriginal stories, with themes such as family and growing up, and almost all of them are extremely positive.”

Staged with the support of the NSW Reconciliation Group and held as a collaboration with Australian Film Commission screening program Black Screen, the three-day festival will feature films such as the highly-acclaimed Ten Canoes, My brother Vinnie and the extremely moving Liyarn Ngarn.

Ms de Vries spoke highly of the homegrown talent to be found in the various documentaries and short stories, as told by the people themselves.

“Ten Canoes is the first Australian movie totally in an indigenous language.

“We also have some very exciting documentaries including the recently screened Liyarn Ngarn, from which the festival takes its name.

“This documentary premiered, to great acclaim, less than two months ago in Sydney.”

English actor Pete Postlethwaite tells the story of the tragic death of indigenous man Louis, telling of the devastation and inhumanity faced in many everyday lives.

The festival is being staged again after the success of last year’s event. It will begin at the Uniting Church hall at 7.30pm this Friday night. Admission is free.