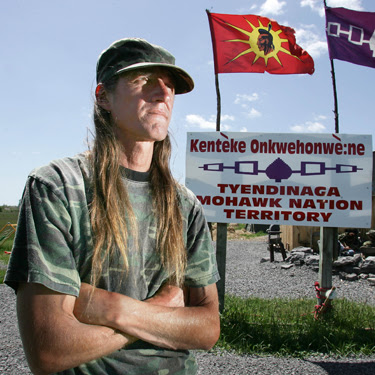 Montreal. Last week in Aotearoa /New Zealand, Maori sovereignty campaigners, environmental, peace and social justice activists, were targeted in military-style raids under the post 9/11 Terrorism Suppression Act, and are being painted in the media as terrorists. Police raided homes, confiscated possessions and imprisoned at least seventeen mainly Maori activists in a military-style operation. Amongst those arrested was prominent Maori activist and community worker Tame Iti, who has been denied bail along with eleven others.

"We are not terrorists - we've been terrorised" read banners on a 1500 strong demonstration on Friday in the small town of Whakatane, in solidarity with the arrestees.

On Monday, October 22, 2007 at 13h, we are protesting last week's raids, and drawing attention to Canada and Aotearoa/New Zealand's hypocrisy with respect to the rights of Indigenous peoples.

New Zealand is now waging a militarized campaign against Maori sovereignty, environmental and social justice activists. Shamelessly, New Zealand announced its candidacy for the UN Human Rights Council for the period 2009-2012 this past Friday.

Maori advocacy for self-determination was portrayed a domestic "terrorist" threat in Aotearoa long before 9/11 and long after colonization of the nineteenth century.

We stand in solidarity with those in Aotearoa/New Zealand, like here in Canada, who continue to be terrorized and persecuted by legislation that criminalizes dissent, particularly those most affected – Indigenous Peoples and immigrants of colour.

This summer, Tyendinaga Mohawk activist Shawn Brant was arrested after blockades of rail lines and highways on Tyendinaga land. A leader in his community's struggle, he has been portrayed as a criminal and terrorist. Like Tame Iti, Shawn was jailed in July 2007, and was denied bail until the end of August.

Communities in the Mohawk territories of Kahnawake, Akwesasne, and Kanehsatake are all too familiar with racist government repression and attacks. In Kahnawake in 1990 and in Kanehsatake in 1994 the Canadian government used the military to attack and repress Mohawk people. In 2006, we saw heavy police repression in Six Nations when Indigenous activists reclaimed their land. This summer's police crackdown after the June 29th days of action are proof that colonialism is alive and well in Canada in the 21st century.

Repression hidden beneath laws to supposedly fight 'terror' has become all too familiar.

WHEN: Monday, October 22, 13h
WHERE: Outside the UN Secretariat of the Convention on Biological
Diversity, 413, Saint Jacques Street, Montreal