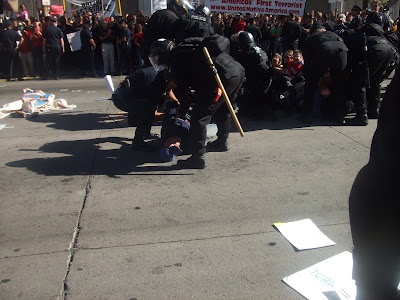 "Native protesters were bloodied by riot police here today, following a street confrontation against an annual parade which was held this year on the 100th anniversary of Columbus Day in Colorado, the first state to observe the holiday.

Eighty-eight Native men and women and their supporters were arrested on misdemeanor violations of the Denver Municipal Code, after black-clad riot police wrestled them into waiting vans, injuring at least three people.

The misdemeanor charges carry maximum penalties of up to 1 year in jail and/or $1,000 fine, according to legal services volunteers.

The two-hour parade featured floats related to the Columbian invasion and scores of leather-jacketed motorcyclists who gunned their engines loudly to the jeers of the several hundred-member crowd.

Protestors were from Colorado and surrounding states but also from more distant locations, including Alaska. They included a coalition of Native groups and also those from the Denver-area Progressive Italians Transforming the Columbus Day Holiday (PITCH).

In the past, Native organizations and the Transform Columbus Day Alliance have asked that the name “Columbus” be eliminated from the parade, which purports to be a celebration of Italian pride but which is termed a celebration of white supremacy by opponents. The Sons of Italy, the parade organizers, have refused the request. 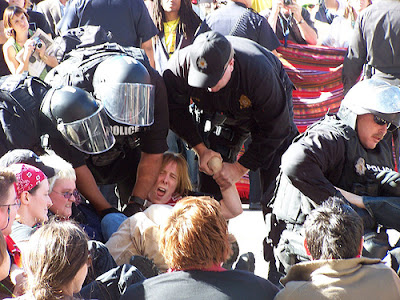