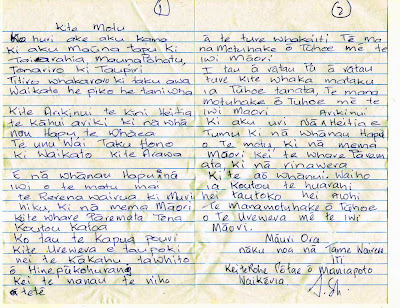 Tame Iti's letter is a plea for support from Maori leaders, tribes,
sub-tribes and families, and other New Zealanders. The letter is written
in traditional idiom and style. In line with an older Tuhoe dialect the g
is often dropped, such as "kini" instead of "kingi" for "king".

Several words are metaphorical or iconic, each having multiple layers of
meaning or symbolism these are expanded in the translation.

Iti opens in a classically respectful manner acknowledging the sacred
mountains of his ancestors. He also acknowledges kinship links to the
traditional leaderships of the Te Heuheu and Kingitanga dynasties of
Tuwharetoa and Tainui. Iti beseeches their assistance and support.

The letter is humble. Iti frames the context of what has happened over the
last two weeks within the context of Tuhoe and Maoridom rather than
himself. In traditional style, he leaves the choice of support to those he
addresses, while cautioning that the challenges now facing Tuhoe should
concern all Maori.

Reactions will be interesting. The appeal to Maoridom, traditional style
and selflessness will appeal to a broad range of Maori.

The major leaderships such as the Kingitanga and Tuwharetoa and others may
seek time to reflect before responding. Their challenge will be to balance
a strong sense of duty to a fellow leader and to Tuhoe while maintaining a
dignity and aloofness above political gesturing.

Many will express support on the basis that the events of October 15 at
Ruatoki were an over-reaction far outweighing any valid charges and too
reminiscent of the 1880s storming of the pacifist settlement at Parihaka,
the unjust confiscation in Tuhoe, the 1900s arrest of Rua Kenana and
killing of Maori at Maungapohatu, and the clearance of radicals at Bastion
Point in 1978.