Omar Hamed is my Brother 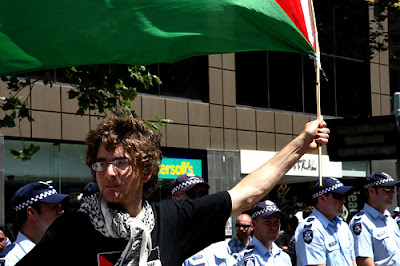 Standing at the dock is a skinny 19-year-old boy, fluffy hair, wearing glasses and an old wool jersey, he gives a smile to his mother and friends.

Like all the defendants Omar Hamed is charged with firearm offences and police are still considering laying terrorist charges against him – he is one of the 17-arrested in the police raids last week.

Half-Palestinian, born in Greece but raised in New Zealand, he has campaigned for social justice from an early age. In the past he has told reporters that he gained his inspiration from seeing his mother struggling to stop National and NZ First attacks on social welfare.

He told them that once he began to get a better understanding of issues he started writing and educating others. He has written several pieces published on Scoop.co.nz in recent months.

An active member in Students for peace and justice in Palestine, Omar is also active in a range of causes in New Zealand, that include the www.Supersizemypay.com campaign aimed at raising the minimum wage, and Radical Youth.

He currently studies History and Sociology at Auckland University.

Maire Leadbeater the head of the New Zealand Indonesian Human Rights Committee and sister of Green MP Keith Locke has worked together a lot with him.

She describes him as someone who is, “very dedicated and committed to human justice.”

“He was one of the key people with an interest in the Superfunds,” she said. “He did a lot of research into the superfund investments.”

The Governments Superfund has come under pressure this year because of revelations of apparent unethical investments, it includes investments in arms manufacturers, nuclear technology, and Total- the French petroleum company that has operations in Burma.

He was “keen for everyone to work together [to raise the Superfund issue]” Leadbeater says, he even attended a meeting with Superfund director in August to discuss the possibility of ending those investments.

A friend and activist that has known him for 3 ½ years says he was an articulate speaker and also very passionate.

He went on to say that that some people come along to protests for the fun of it but he was really committed, he would spend hours researching and writing about the different causes.

“He is someone who cares about the issues, which stems from the fact that he cares about people,” the friend said.

Hamed was also instrumental in organizing the recent protests against the US-NZ Partnership forum and also lives and helps run A Space Inside Social Centre, an Anarchist collective on Symonds Street. It runs as a bike workshop, library, meeting room for discussion of ideas and holds film screenings and shows for anyone interested.