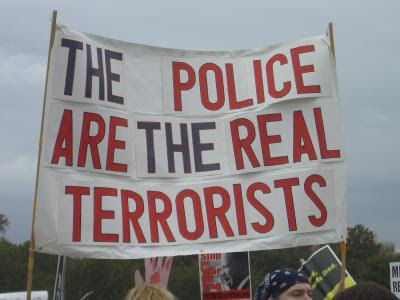 Love and solidarity to all the arrestees, treating us like terrorists
is bullshit and this trend of treating Indigenous peoples with long
standing and valid historical grievances as "terrorists" is
bullshit. Who committed the genocide and stole our lands and tried to
wipe our culture out, those bastards then and now are the farckn
terrorists.

A para-military group training in the remote eastern Bay of Plenty is being hunted by police under anti-terror laws.
Maori and environmental activists are believed to have been targeted in a series of early morning anti-terrorist raids across the North Island today in which firearms were seized and arrests made.

Sources have told nzherald.co.nz that police are investigating a para-military radical group that has been attempting to recruit and train people in the eastern Bay of Plenty.

One source said key leaders from around the Ureweras have been approached to join the group, which calls itself the Freedom Fighters.

The source said the training took place in the remote mountain areas, with participants wearing balaclavas and using military methods.

The armed offenders squad today executed search warrants under the Suppression of Terrorism Act and the Firearms Act at addresses in Auckland, Whakatane, Wellington, Ruatoki, and Hamilton.
More than a dozen people have been arrested and will appear in courts later today on firearms charges. More serious charges are believed likely to follow.

A larger number of people have been taken in for questioning but have not yet been charged and other addresses are expected to be raided.

Herald reporter Juliet Rowan is at Taneatua, about 9kms from Ruatoki and says there is a "massive" police presence.
A roadblock which was earlier in place at Taneatua has now been moved back towards Ruatoki by about 2kms.
Only police vehicles are being allowed through, though a number of cars heading away from Ruatoki have been allowed out.

A helicopter was seen flying up the Ruatoki Valley at about 11am.
Juliet says those in vehicles coming through the roadblock said police had used mirrors to search their cars in Ruatoki.

It is understood Police Commissioner Howard Broad and Prime Minister Helen Clark have been briefed about the investigation.

A press conference in Mr Broad's office has been called for midday today. It is understood the conference is being held in relation to today's raids.

Helen Clark was asked about the anti-terrorism operation this morning and said: "I am aware of a police operation. I don't have anything further to say about it right now."

Search warrants had been executed in central Wellington and surrounding suburbs, Palmerston North and Christchurch, he said.

Police were looking for people, firearms and ammunition.

Mr Quinn said several people were being interviewed by police, and firearms and ammunition had been seized.
Searches were yet to be completed at several locations.