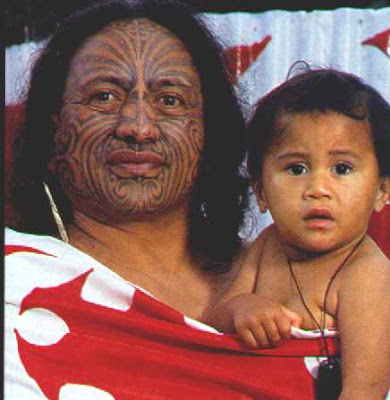 Waitangi Day , and Tame Iti is the manifestation of every Pakeha's worst nightmare. Sturdily built and proudly bearing an intricate moko covering the entirety of his face, he spits in front of the Governor General, Cath Tizard, before delivering his piece de resistance, a whakapohane, a baring of the buttocks - an action hard to top on the list of Maori insults. His face is flashed on news bulletins around the world: beware the dangerous face of Maori radicalism.

t is said that when he was about a month old he arrived in Ruatoki in a disused mail box which was placed on the table of the wharekai at Mahurehure. His whangai parents, Hukarere and Te Peku Purewa, an elderly couple who had raised Tame's father and 14 children of their own, took him home. All told, they raised 26 whangai children. Tame himself is a socal worker dealing with substance abuse and domestic violence issues in his home valley he's lucky that his partner Karen and his whanau are so supportive of him, says longtime associate Tamati Kruger "his home is like a bloody marae. I mean, the man needs a licence just to operate his carpark. It must be the most active marae in Tuhoe."

Growing up in the heart of Tuhoe country where the spectres of Te Kooti and Rua Kenana maintain an almost tangible presence, the seeds for Maori nationalism were firmly planted in the mind of young Tame Iti. Each Sunday he would accompany Te Purewa on a kai gathering expedition, and at the foot of Taiarahia, the sacred mountain of Ruatoki, they would stop to spear eels. On these occasions, Te Purewa would point to the land occupied by the Pakeha families and talk about injustices and grievances that, decades later, continue to haunt Tame. "Dad called them whanako - stolen lands. He didn't talk about raupatu or confiscation. They were lands stolen by the Pakeha last century" says Tame. He speaks quietly but resolutely, often changing to Maori to emphasise a point."On another dav he said to me, 'see that lake over there, that's where my young brother was shot by a Pakeha". When asked why or how that had happened he replied, 'there was no reason, the Pakeha was trying to intimidate him and ending up shooting him dead'." The Pakeha neighbour was never arrested or taken to court, but a little while later he was found dead - hanging from a tree.

For those in the know, Tame lti is no Hone come lately He's been involved in Maori protest for much of his life, prepared, according to Tamati Kruger, to risk the wrath of his elders and "walk his talk". Tame was just a nipper when he staged his first show of defiance. "The principal of the school here in Ruatoki told us that we had to speak English. I didn't want to do that. To me if vou didn't speak Maori, you weren't a Maori." The punishment for defiance was to join a squad which picked up horse dung. Given the popularity of horse traffic in Ruatoki it was a substantial punishment.At 15 he left the security of Ruatoki and headed for Christchurch and a strange, new world outside the valley. Increasingly, he became drawn into political struggle against the system. It was a crucial stage in Tame's life, providing him with the political ideology that would lead to more than two decades of direct anti-authority action. He joined in the "No Maori, no tour" protest, read about communism and went to China in the early 1970s, followed the American Black Panther movement, and helped set up the Maori Liberation Front, before moving north to Auckland where he met up with Syd and Hana Jackson and others who would eventially become key members of Nga Tamatoa.

Over the years Tame has been the brains behind some exceedingly novel protest action. In the 197Os he and some mates decided that Maori were such strangers in this land that thev needed to set up an embassy Borrowing a small tent from his birth father in Huntly, he made his way south. In Wellington he pitched his tent beneath Dick Seddon's statue in Parliament ground, lectured the lunchtime passersby until, feeling bit tuckered out, he stretched out his bedroll, zipped up the tent and had a snooze. A couple of hours later he was politely woken by an elderly policeman. Explaining that he was Tame Iti, the new Maori ambassador, he then wangled his way into the office of the then Maori Affairs Minister, Duncan McIntyre -some say to present his credentials. The episode ended in TV cameras, handcuffs and the "ambassador" being subjected to Her Majesty's hospitality for the night.

Then there was the time when Tame decided to stop an annual jet boat race up the Whakatane river that local kaurnatua had felt powerless to prevent. Getting nowhere by politely phoning the Pakeha race organiser, Tame plunged into the river; watched by nervous whanaunga from a convenient viewing platform. As the first boat approached he closed his eyes to karakia, opening them just in time to eyeball an irate jet boat driven In the split second in which their eves met, the driver swerved and ran into the willows lining the bank. It earnt Tame six months of PD cutting blackberry, though after two weeks he appealed his sentence -but that's another story.. Undeterred, the following year Tame was back in the river again, on horseback this time and with a few rnates for company There were more arrests - but no more jet boat races.
Earlier this year at the Mataatua hui to discuss the fiscal envelope, Tame startled Doug Graham by mounting a stepladder he had brought for the occasion. When it was his turn to talk, he stated his case and then handed a bewildered Doug Graham a blanket. "It was a symbolic gesture - a blanket for our stolen land," says Tame.
His embassy theme has been resurrected with the setting up of the Tuhoe Embassy in the middle of the Taneatua township. Tame is serious about his mission to build a "Tuhoe Nation".

The embassy, a caravan with a makeshift awning, is staffed by some of the iwi's rangatahi. Late last year Tame (the Tuhoe Ambassador) issued eviction notices to Pakeha landowners on Maori land in the area. Reactions were mixed. says Tame: "one farmer said that before Tuhoe ever got hold of his farm he would flatten everything with his bulldozer others studied the paper carefully and said, 'do you have the support of your people in this?' and so on. "The purpose of the notices was to let them know this is Tuhoe territory" he continues. "I don't expect them to move out next week. When we regain our sovereignty they're welcome to stay. They can come to our marae and talk to us and we will shelter and feed them. But once we regain our sovereignty then they need to know that thev will be living under Tuhoe rules. "I came back here to Ruatoki because this is where I belong; for me it's where everything begins and finishes. This is Tuhoe land and it should be run according to our tikanga."

According to Tamati Kruger Tame has learnt that a Maori nationalist has to be prepared to do it alone. "He does what he does because he believes in it. If nobody turns up to a protest he won't go home he'll do it by himself. He's very much like his tupuna Te Purewa in that respect. If 90 percent of Tuhoe said to him to shut up, he'd just carry on. He has that sort of resoluteness and determination.
"But, to be fair, in all the vears I've attended hui with him I've never heard a kaumatua criticise his actual politics or ideals. It's more the delivery they have a problem with." Many who don't know him assume, and his moko probably has something to do with it, that Tame is a violent man. Nothing could be further from the truth. As one friend says, "he's alwavs there to help people out. He quite often has battered or scared wives turning up at his place and he'll meet them at the gate to take them in. And you can bet some of the husbands who turn up there are real pissed off. Tame puts himself on the line all the time."

TV producer Puhi Rangiaho, who grew up with Tame, says it's that sort of commitment that means people take him for granted. "People back home don't really realise how much work he's done for the tribe and for Maori."
But Tame says it's not recognition he's after "I don't see myself as the great leader here. A lot of the time the rangatahi do the work like at the embassy, I just keep an eve on it."

Whether he likes it or not he is an "identity". Having a rull facial moko in the last years of the 20th century is a powerful statement. It took Tame five years of thinking and consultation with his koroua before he subjected himself to the pain of the moko. Because of the pain, it took 10 hours, spread out over four months. According to Tame some of the most surprising reactions have come from Pakeha.
"They're positive, too. I see them staring at me. l was at an airport and a young woman came up with her child and said, 'that's a moko son'. She didn't say tattoo, she said moko. That surprised me. The only negative reaction I've had has been from the media."

and if your a fan of Tama shooting that nz flag wipe: