Jury's out on Palm Island case 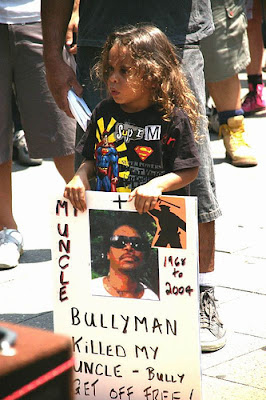 
"IT REALLY does look like he's done it, doesn't it," a prosecutor yesterday said to jurors in the trial of the first Australian policeman charged over an Aboriginal death in custody.

Senior Sergeant Chris Hurley has pleaded not guilty to manslaughter and assault. It is alleged he deliberately kneed Mulrunji Doomadgee in the abdomen, rupturing his liver and portal vein and causing him to bleed to death in the Palm Island watchhouse on November 19, 2004.

In his closing submission to the jury in the Queensland Supreme Court in Townsville yesterday, prosecutor Peter Davis, SC, said Hurley had the motivation to assault Mr Doomadgee, after the Aboriginal man resisted arrest and punched the policeman.

He said Hurley also had reasonable opportunity to do so.

Hurley's barrister, Robert Mulholland, QC, accused the Crown of being politically motivated in its pursuit of the policeman.

The jury will retire to consider its verdict today.
Posted by Ana at 08:25