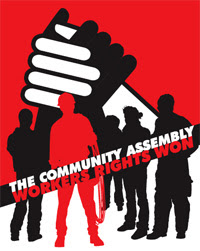 The meeting will discuss the serious situation in the construction industry where the CFMEU and other unions are under enormous pressure from the building task force.

Approximately 90 investigations leading to possible prosecution, fines and or jail
terms is currently running Australia wide with approximately 56 of them affecting Victorian building workers and unions.

Specifically we will outline the situation on a large building site in Melbourne where shop stewards have been sacked and workers are denied the representative of their choice. We will discuss possible responses to this; concretely one item will be the organising of a phone tree for a rapid assembly/picket if the need arises.

Recently construction workers in Port Campbell building the Woodside gas plant who attended a mass meeting in defense of a sack shop steward have been summered to appear before the ABCC(Australian Building and Construction Commissioner). If the workers refuse to attend they face heavy fines and a jail term.

Construction union members are afforded less rights than accused criminals (they are denied the right to silence), at least if you rob a bank you have the right to remain silent in court.

Even discussing matters raised in the commission with partners and family could result in fines and a jail term.

These outrages must stop. Behind the recent hysteria in the media about what certain union officials have said is the reality that employers in the building industry (and in general) want to smash some of the most militant and effective unions in Australia.

Government backed and funded agencies like the ABCC are merely a tool to allow employers to get their way, deny working people basic democratic rights and increase the employer’s massive profit
margins.

You can make a difference, please attend this vital meeting and pass this message on through your networks. If you can’t attend the meeting and wish to be included on the phone tree ring the
number below.