Discussion Paper on: National Day of (In)Action Proposed by AFN 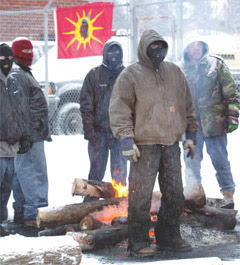 Thanks to the Warrior Crew & Anhi for this important clarification

The Assembly of First Nations (AFN) has called for a 'National Day of
Action' to occur on June 29, 2007. The purpose of this is to pressure
the federal government into providing more funding for Native programs
& services. Specifically, it is in response to the recent federal
budget, which did not allocate enough funding for Native peoples,
according to the AFN.

While Indian Act chief Terrance Nelson of the Roseau River band in
Manitoba has called for 24-hour blockades of railway lines, AFN grand
chief Phil Fontaine has been downplaying the call for militant action,
saying that the 'day of action' is meant to consist of
peacefulprotests by Natives across the country. But he can't control
what individual chiefs & bands choose to do, he added.

Fontaine's distancing from blockades and other actions may be due to
government threats to cut funding to bands that do engage in economic
disruption, such as blocking railways or highways. Ovide Mercredi, a
former AFN grand chief & current band council chief, also released a
statement saying direct actions would be counter-productive and lead
to a loss of public support for Native peoples.

The AFN, which is comprised of Indian Act chiefs from over 600 bands
across Canada, is especially vulnerable to funding cuts since it is a
government funded organization.

As noted, the AFN's main goal in its 'day of action' is to gain more
funding, which it claims is necessary to making Natives equal citizens
in Canada. This is indicative of the assimilation that the AFN
promotes. Like the band council system it is based on, the purpose of
the AFN is to control Native peoples and to administer government
policies. Canada's strategy has always been to assimilate Natives,
and this is why it established the band councils and, later, the AFN.

Part of the band council's & AFN's ability to control Native peoples
is to appear as an oppositional force against the government. This
creates the illusion that they truly represent the interests of the
people, and not the government that created & sponsors them. The
AFN's attempt to portray itself as more aggressive in its relationship
with government may stem from a recent rise in Native militancy,
including the 2006 Six Nations land reclamation in Caledonia, Ontario.

At the same time, the AFN & chiefs really are engaged in a struggle
with the government, not only for more money but also for power &
authority. They use genuine Native resistance & the threat of an
uprising as political leverage, promoting themselves as the 'rational'
alternative for negotiated settlements that, if ignored, will lead to
violence & chaos.

Sometimes, the chiefs and band councils even sound militant,
advocating direct action and resistance. In the end however, they
never really do anything, and certainly not in a way that challenges
the colonial system. Last year, chief Nelson also threatened a train
blockade on the same day, but backed out in the last minute.

According to Sun Tzu, before we make alliances we must know the
strategy & intentions of any potential allies. In the case of the
AFN, we already know what this is. It isn't liberation or defending
the land, it's assimilation and capitalism, which is all about
oppression and resource exploitation.

It would be a mistake to engage in any actions on July 29, 2007, as
this will only serve to legitimize the AFN and the Indian Act chiefs.
If there are protests & blockades across the country, people here &
around the world will think the AFN is strongly supported by Natives.
Many Natives may even believe this.

As it is, because the AFN and band councils do not have widespread
support, there will likely be little direct action taken, and only a
handful of protests across the country. This is probably why Fontaine
& the AFN have also distanced themselves from actions such as chief
Nelson's proposed train blockade. If nothing happens, everything went
according to plan (peaceful protests). If there are blockades &
occupations, then it will bolster the AFN's 'bargaining' position
with the government.

Either way, our struggle will not be advanced. Instead, it will only
add to the level of confusion & misunderstanding perpetrated amongst
our people by groups such as the AFN. In a struggle for liberation,
we must make a clear distinction between ourselves and our opponent,
including those who collaborate and act as neo-colonial agents for the
enemy. We must not let our struggle be determined by traitors &
sell-outs, Aboriginal capitalists with no principles but the
accumulation of more wealth & power, the local agents for a corrupt &
oppressive colonial regime.

Warning: responses will be recorded by government security forces.
Use anonymous email address from publicly accessible computer if
counter-surveillance is important to you, and especially if discussing
tactics & strategies.
Posted by Ana at 12:17

So good topic really i like any post talking about Investment Plans but i want to say thing to u Investing not that only ... you can see in Investment Private Responses and more , you shall search in Google and Wikipedia about that .... thanks a gain ,,,