Pasifika Unite Stand Up Fight back 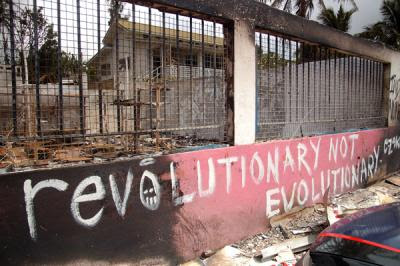 Big ups to the Aotearoa Indymedia Crew for their excellent work & recent feature articles bout the Pacific. With Press censorship a reality for many Pacific Islands these reports and voices are crucial....go the grass roots.

As the leaders of the G8 summit in Heiligendamm in Germany hammered the final communiqué on climate change, half a world away, in the small Pacific island country of Tuvalu, Silafaga Lalua, a born and bred islander pondered her shaky future on the islands, as she has always done again and again.

Silafaga Lalua has a difficult decision on her hands, to either pack her bags and leave Tuvalu for safer territories or stay and watch her country slowly sink under the rising sea levels in the Pacific and hope for the best. Scientific predictions from the Australian Government predict dire consequences for the island in the next 50 years. Other predictions say it could be sooner. So for Silafaga, both issues are not easy to deal with , but she is increasingly aware that something has got to give.

On the Eve of a Free Trade Area of the Pacific – Occupation, neo-colonialism and enclosure

New Zealand Minister for Trade Phil Goff has announced that talks will begin in August to begin the process of imposing a Free Trade Agreement to bind the economies of the sixteen nations of the Pacific Islands Forum together. Australia, New Zealand, Fiji, Vanuatu, Tonga, the Solomon Islands, Samoa, Papua New Guinea and a range of other small island nations together comprise the Pacific Islands Forum.


The Free Trade Area of the Pacific has been in the pipeline at the Pacific Islands Forum for years now as New Zealand and Australian capital seek to carve out throughout the Pacific new markets, cheap natural resources and a flexible and disposable labour force.

The recent year in the Pacific has only heightened the increasing tension between the interests of Australian, New Zealand and American capital and those of Pacific peoples subject to increased repression, surveillance, control and impoverishment. In Timor Leste, Tonga and the Solomon Islands Australia and New Zealand have intervened directly into the political affairs to enforce their control over these nations and curb, criminalise and destroy popular social movements.


Five Tongan People's Representatives, charged with sedition in relation to the Nuku'alofa riots, have asked not to be tried by a jury, but by judge alone. The accused, 'Akilisi Pohiva, 'Isileli Pulu, William Clive Edwards, Lepolo Taunisila and 'Uliti Uata will be submitted in six weeks time to the Supreme Court for a trial date to be set. The alleged incident took place in the Cabinet Room at the Prime Minister's Office on the afternoon of November 16 last year.


A second sedition charge jointly for Pohiva, Edwards and Uata, relates to speeches they made at Pangai Si'i on November 14. There is also a joint charge of unlawful assembly for all five accused, which will be submitted also to the Supreme Court because it is under their jurisdiction. The preliminary inquiry hearing into the sedition charges ran from May 14-3