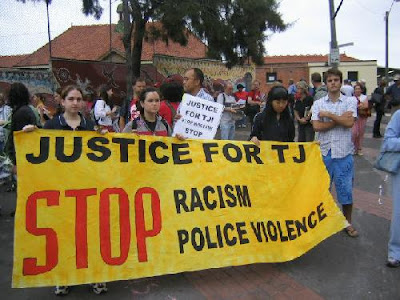 now on the subject of the Redfern "riot". It like the Palm Island "riot" was actually the result of a reaction borne out of an Indigenous community's grief - a community that had just lost a 17 year old boy, T.J. Hickey. That so -called "riot" had to happen, as many of us know, to deflect the public's attention away from the fact that T.J. was killed by that police vehicle following the pursuit.

Not only that but until this day there has been no proper justice - just a sham of a Coronial Inquest in which it was pointed out in SBS-TV's Living Black, Episode 3, 2007, that the N.S.W. Coroner, Mr. J. Abernethy, made what is known as "an error at law" by not issuing the police officer who drove the pursuit vehicle, Michael Hollingsworth, with a certificate to allow him to take the stand at that Inquest.

Shame, shame, shame - N.S.W. is a police state and a bad police state at that. How can such a Coronial Inquest be served up and people including the Hickey family and all those who support there quest for justice and closure be expected to believe that it was ever meant to serve Indigenous Australians with any real justice??
T.J. Hickey was impaled on a metal fence and then removed from it by police (anyone with even basic first aid knowledge knows that a person in such a situation would just need to support the victim's body while an ambulance/rescue vehicle are called). No, remove the boy, then proceed to search him!!! How evil is that??


I have heard that one Aboriginal Community Liaison Officer on reporting for work at Redfern Police Station on the 15th Feb. 2004 asked if he could go down to The Block to talk with the community but apparently this request was denied by superiors and the question needs to be asked why was this so? DIscussion and communication could solve many problems in the world around us - we all know that. It may have even actually defused the situation at The Block! The answer, of course, is simple to anyone with even half a brain and that is they WANTED and dare I say, needed that RIOT!

As if all this manipulation wasn't enough then on with this farcical inquest and it's shortcomings (some of which are listed below).

In addition to these shortcomings the VKG police communication tapes were not presented/examined as evidence!

One of those Aboriginal Community Liaison Officers, Mr. Paul Wilkinson, who was later dismissed from that position, has recently been arrested and charged with an extremely serious crime and is being held in remand.
WHY???? This case needs to be followed and scrutinised closely for obvious reasons. There are many types of justice and the sort Aboriginal people in this country seem to be subjected to is INJUSTICE.

We all need to do everything possible to ensure that Paul does not become yet another Aboriginal Death in Custody.

Early on, the Strike Force Coburn Report (‘Coburn Report’) states that, ‘Redfern aside, one cannot overlook the possibility of an international incident sparking a large scale violent response threatening public order within NSW.’[2] In fact, with a few scant exceptions, the dynamics of the Redfern community do not enter Coburn’s radar, and consequently the Report fails to consider the wider implications of its own recommendations.

Although TJ Hickey’s death was the principal catalyst for the Redfern Riot, that riot did not occur within a vacuum, and arguably were it not the death of TJ Hickey, something else may have sparked a revolt in Redfern. In this paper I argue that sadly, the death of TJ Hickey is not exceptional in that his untimely and unjust death is part of a continuous degradation of Australia’s Indigenous peoples. The tensions between Indigenous Australia and police represent a greater fissure stemming from the lack of autonomy, self-government and self-determination that defines the Indigenous political struggle in Australia.[3] The police response as elucidated by the Coburn Report merely perpetuates these historical processes

Non-Lethal Intelligence: Strike Force Coburn and the Police Response to the Redfern Riot
http://www.austlii.edu.au/au/journals/ILB/2005/17.html
Posted by Ana at 16:25