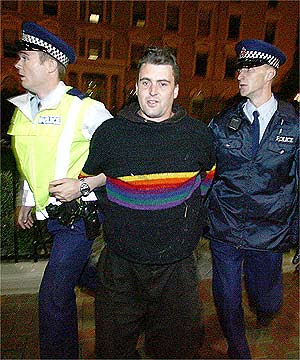 TAKEN AWAY: An anti-war protestor is lead away after a flag burning incident at Wellington's Anzac dawn service.

Bro was only doing a 'Tama Iti' on the flag wipe. Kia Kaha. NZ/OZ Troops/Police out of the Pacific-Haere Atu

Tens of thousands of New Zealanders marked Anzac Day at Dawn Services around the country this morning.

Solemn ceremonies were attended by large crowds in Auckland, Wellington and Christchurch, with protesters who burnt a NZ flag in Wellington making the only sour note.

A record crowd of about 15,000 attended the 68th dawn service in Auckland, while 8000 turned out at the Square in Christchurch.

In Wellington, the tightly packed crowd lined areas around the cenotaph, with young children kneeling at the front and many people craning their necks to get a view of the ranks of about 150 veterans.

Chaplain Colonel Margaret Hay told the crowd they were part of a "vast company" of people around the country who had gathered at Anzac Day dawn services to honour the efforts of servicemen and servicewomen.

Two veterans were given medical attention after becoming faint during the ceremony in Wellington.

Hayley Westenra led the singing of the national anthem.

A man and woman are to appear in Wellington District Court today charged with obstructing a police officer and offensive behaviour respectively after the incident.