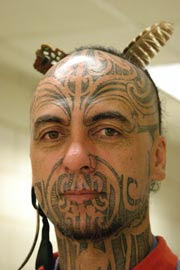 George Tamihana Nuku is a striking and enthusiastic spokesman of re-emerging pride among many indigenous cultures around the world. His elaborate facial tattoo, or moko, distinctively identifies him as a Maori tribesman—a man, that is, whose very identity is inextricably tied to his ancestors and their centuries-old traditions.

So it may seem ironic that Nuku is touring with ResFest, a film festival on the cutting edge of modern digital technology. Yet, as he describes it, it is very appropriate to use modern technologies to adapt, perpetuate, and explain traditional practices.


Nuku is a carver and sculptor as well as a rangatira—a chief. He is third in line in the leadership of his sub-tribe of the Ngate Kahungunu, a Maori tribe in the Heretaunga region of New Zealand's North Island.
Moko—Art of Nature features Nuku and the application of his moko. It is one of nine short films that together make up Off the Map. Assembled in collaboration with the National Geographic Society, this set of decidedly non-traditional films seeks to combat increasing geographic illiteracy.
Nuku spoke with National Geographic News during a recent stop with the film tour in Washington D.C.

Why are you here? What would you like to tell people about yourself and about the Maori and the moko?
The film is about something really significant that occurred in my life, and that's receiving the facial moko. I'm very interested in talking about moko and explaining about why we have the art of moko and what it means to us now in this time. I'm interested also in the relationship with moko from the past and how it has formed the basis of our culture and, like I said, how it applies in today's context. I think you can almost use it as a watermark for other issues involving native peoples. How they can have a living, breathing culture as opposed to a display cabinet view of culture.

Is it appropriate for people to ask you about the moko and your culture? How does that make you feel?
I'm glad people stare because it's something that's meant to be looked at…I'm sure people are curious about moko. I would be. If I didn't know anything about it and I saw someone who looked like me, I'd want to ask something and I'd want to stare. I find that the children are the ones who don't have a problem with that. They come straight up to me and "What's that on your face." And they stare. That can be unnerving and it's sort of just as educational for me as well as for them.

What kind of reaction have you had from folks here in the States?
Well, you'd be surprised really because some people are just quite, "Oh, there's another guy from San Francisco or somewhere like that." Other people just about crash their car into the guy in front of them, you know. There's the whole spectrum of reactions. Some people are, I guess, quite blasé about it, like maybe they have seen it before. Some people, they haven't seen it before.


Can you talk a little more about how moko represents connections between the past and the future, and connections between generations?
The moko is our signature…It is what our ancestors signed their documents with. They used their facial moko when they first traded with the Europeans—the British. Historically, we say that moko comes from the underworld.
The gods associated with the tattooing gave it to the people to bring up to the surface. It is a beautiful metaphor for the revival, because we say that it was underground when it was abolished and there was persecution. We have brought it back up to the surface again like they did in the ancient times…It is not a static art form. It is a breathing, living, growing art form.

The practitioners of today are doing a fantastic job of creating a moko for the twenty-first century that is relevant to our needs and our aspirations of now and our lifestyle. For example, we are using modern technology in the creation of moko. We are using sterilizing machines and rubber gloves and electric needles. We say this is a very traditional practice to use the best things available to you to create your story.

I think our ancestors would be proud of us for adopting this approach of utilizing the best to maintain our standard, to lessen the likelihood of degeneration of the art form…I know that in the [next generation's] time, the moko will be an exciting art form. It will be something that will reflect their times.

We're not really interested in photocopying the past…But we combine things with the things that we hold dear from our ancestors' notions of having the mandate of your group, of being accountable, of attainment, of mana, prestige—through doing good things and sharing and providing for each other. Those things are timeless and they're always going to be like that for us Maori people. If we don't do those things, then we can't call ourselves Maori anymore.

Elements of moko have been adopted by certain parts of Western popular culture. I'm curious what you would say to a young American teenager who has a tattoo with elements of the moko in it. What would you want him or her to know?

Young people…are going to seek something that's exciting and intoxicating like moko and the connotations that go with it. They're also going to look for some form of identity and something that makes them distinctive in the global morass…This has been a subject of long and bitter discussion at home amongst the peoples, where people have advocated that we shut the door and don't allow people access to our moko…
The practitioners are saying quite the opposite. They're saying we must go and engage and we must take our art form to the world because then at least we have a say in the quality of the art form and we are present when the questions are asked, so we get the first opportunity to explain the moko firsthand as opposed to somebody interpreting the moko on our behalf, who may not necessarily be correct or be qualified to say those things.


How would you respond to non-natives who wear some of the designs that are similar to the moko?
If you don't live the things that go with it, then it's only a design. It's not a moko. First and foremost, it comes from your lineage. It defines who your parents and grandparents [were] from the beginning of time. That's number one.
Number two is that the moko is reinforced and validated by your commitment to the group. And the group owns you. You are the group and the group is you. If you don't have those things, then it's not a moko.

Is there anything else we haven't talked about that you might want to mention quickly?
If I could say anything to people here, I would say to go and hang out with some native peoples. There are many, many nations here in this big, beautiful land. Go and seek them out.

Kia ora my brother.. its nice to find your page and read your words of wisdom.. I hope you are travelling safely around our mother since last time I saw you at Woodford.. it was definately something special to meet you, Tu an D and to watch you in your craft and sharing our culture to the world its very inspiring, was thinking about the fires of the dreaming festival just today Thankyou for the little reminder and bringing me closer to home...
Be home late Aug love to play a tune an catch up with you,an DLT.
Aroha Nui your Kahungunu sista Shelley..XXX