Oxfam action against unfair trade deals between Europe and the Pacific 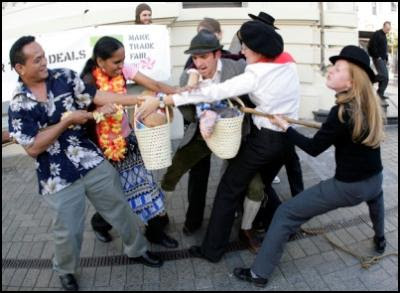 Photo: Campaigners illustrate the unequal partnership between the EU and the Pacific. CREDIT Oxfam NZ/ C.Y.Leow

Oxfam campaigners performed a protest stunt in Wellington city today as part of an international call to action against unfair trade deals the European Union is imposing on the Pacific.

The European Commission (EC) is pushing the world’s poorest countries, including those in the Pacific, to sign Economic Partnership Agreements (EPAs) with the EU by the end of the year.

As currently proposed, Oxfam says these trade agreements will make the lives of 750 million people in Africa, the Caribbean and the Pacific worse, not better – destroying livelihoods and the environment, and undermining future economic growth and regional integration in developing countries.

Oxfam’s Executive Director Barry Coates held meetings prior to the stunt in Wellington with a representative of the European Commission, and the German ambassador. While the delegations have pledged to pass on Oxfam’s concerns surrounding the EPAs in their current form, Mr Coates said he feared it was falling on deaf ears within the trade division of the EC.

“We are very disappointed that there has been no movement from the EC. This needs to be dealt with as a matter of urgency. It is crucial that the Pacific is given an alternative because they aren’t going to be ready by the end of 2007. Business and jobs in the Pacific must not be made expendable pawns in the EU’s negotiating games.“

Today’s action in Wellington’s Manners Mall portrayed a Tug-of-War, where campaigners engaged in an unequal contest between the large EU and the small and remote Pacific Islands.

“Europe, with an economy 1,400 times the size of the Pacific, is taking a very hard line in these negotiations, rejecting most of the Pacific’s proposals. It is vital that the EU starts listening to Pacific voices and works towards an agreement that will help the region make the most of its resources and skills,” Mr Coates said.

Today’s stunt was the first of a series of coordinated actions outside German embassies and European Commission Delegations being taken by campaigners, farmers, workers and organisations across 40 countries, in 4 continents on April 19.

The organisations say that any trade deal between Europe and the ACP should be non-reciprocal and provide at least equivalent to existing market access. It should exclude commitments on services, investment or other trade-related issues and have simplified rules of origin. It must also guarantee extra aid to help with adjustment costs, new infrastructure, and other trade related investments that will enable the Pacific to use trade as a tool for development.

The deadline of end 2007 should not be enforced if countries are not ready to sign. The EU must commit to continue existing trade preferences until alternative arrangements are put in place. There are viable and WTO compatible trade agreements and the EU must offer alternatives to an EPA so that the Pacific has time to negotiate a fair deal.