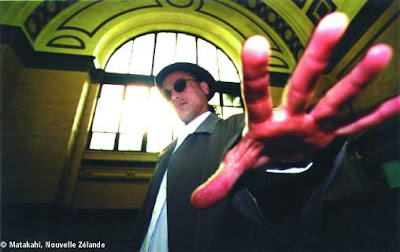 “Nigger!” The biker’s insult blindsided the eight-year-old boy, shattering his vision of both Maori and pakeha (white) society in Aotearoa, the original name of New Zealand. The verbal attack sharpened the boy’s awareness of his society’s colour lines. Afterwards, he couldn’t stand the sight of his fellow Maori cast as the peaceful but subordinate native. Nor could he look up to indigenous gangs in his working-class neighbourhood of Upper Hutt, outside the capital Wellington. Turning to white society, he felt oppression. So the boy began to look inward, to imagine a “new breed”–proud of his Maori past and committed to a radical break with the legacy of colonial domination.

Today, at the age of 34, Hapeta will refer to himself as “one bad nigger” in reference to his hardcore politics as a rapper. Here lies Hapeta’s strength and, for some, his weakness: the ability to weave Maori culture, language and political demands–from land and fishing rights to economic equality–within the style and context of black American hip-hop. Indeed Hapeta and his group Upper Hutt Posse (UHP) have influenced a generation of hip-hop bands and fans across the country. Before these “warriors” stormed the stage, Maori music was generally marginalised like an exotic trinket of the past used in the “ritual” of entertaining tourists. By rapping in their language and incorporating the sounds, values and history of their people, Hapeta and like-minded artists shatter stereotypes of what it means to be Maori.

Hapeta’s political consciousness did not flow from the “cultural awakening” of the 1970s when the Maori middle-class rediscovered its roots. He followed the learning curve of the streets, his whakapapa (“the place where one belongs”). Tuned into the liberation music of Bob Marley, Jamaica’s legendary reggae musician, the songs of resistance rang true in his disadvantaged neighbourhood, where police confrontations were a rite of passage. By valourising the history of former slaves and colonised peoples, the music enabled Hapeta to discover “black outernationality” or the collective struggles of the oppressed.


The impact of Malcom X

In fact, Hapeta’s group UHP began in 1985 by playing reggae inspired by the political message of Marley, considered a veritable saint. But then a new set of prophets landed in Aotearoa: U.S. rappers like Afrika Bambaataa and Grandmaster Flash.

Breakdancing and rapping with crews in the street, Hapeta began mixing a homegrown message with two major ingredients: experience and inspiration. Landing a job at the Justice Department, he scoured the country to hear Maori land grievances. The second element flowed from overseas via The Autobiography of Malcom X.

“The book knocked me out,” he says. “It was great inspiration … that pride in the self and the ability to do something about it.” The life of the black nationalist–a cultural hero for his radical defence of racial pride in the 1950s and 60s–led Hapeta to see himself as a leader with hip-hop as a movement against racism and a political platform for Maori interests. Ironically, Hapeta was soon approached by the son of Elijah Muhammad, the man who banished Malcom X1 from the Nation of Islam, an influential and controversial black militant group. Touring Aotearoa, Rasul Muhammad invited Hapeta and his posse to perform in Detroit and meet the Nation’s leader, Minister Louis Farrakhan, whose antisemitic remarks and inflammatory views on racial separation have sparked heated debate.

In many ways, the trip reflects Hapeta’s ongoing dialogue between Maori culture and African American influences. At first, the balance was tipped overseas. But with time Hapeta struck an equilibrium. For example, he recalls that “meeting Farrakhan was like going to the mountain-top.” There was also the thrill of performing in Detroit and New York and even being interviewed inside Harlem’s Apollo Theatre, where nearly all the great African American musicians have played. Black audiences were apparently amazed by the fluency and force with which Upper Hutt drew links between Malcom X and Maori leaders like Hone Heke. Praise in the homeland of hip-hop helped to legitimize Hapeta’s own sense of authenticity.

But back in Aotearoa, the fiery brand of Maori nationalism has fuelled consciousness and controversy. In particular, his no-compromise stance on land rights rattles more conciliatory activists and, at times, Polynesian groups originally from the Pacific Islands of Samoa, Nuie and Tonga. For example, at a 1990 concert, Polynesian fans told Hapeta “to go home” after he announced that Aotearoa was the land of the Maori. The same year, Hapeta successfully sued for defamation the newspaper Auckland Star over claims that Upper Hutt Posse had barred two pakeha youths from a concert. Ironically, the political talks peppering Hapeta’s shows are generally well accepted by pakeha audiences.

Today, Hapeta is working as a solo artist under the name Te Kupu (the word) instead of the former D Word. Two versions of his latest album Ko Te Matakahi Kupu (or The Words that Penetrate) were released in January: one entirely in Maori and the other in English. These changes reflect Hapeta’s personal evolution. Before the evils of society appeared to dominate his work. Now, Hapeta seems to have found an inner peace in his reliance on his culture. Within the Maori community, he is respected as a political leader for his dedication to Te Rao (Maori language) and culture. But the warrior is still alive, staking claims in new territory: mainstream society. “Promote it [Te Rao], push it into the mainstream. Use its concepts of caring, social concern as a way of changing attitudes,” says Hapeta, who is pushing for more than just space for his albums in record shops and on radio stations. His words are intended to penetrate mainstream society.

Hapeta’s horizons widen as he travels internationally to check out the local political platforms of other “conscious rappers” in the UK, for example. “I’m learning from all struggles, getting out of my skin and [coming] back to share, as an ambassador for the Maori people.” In many ways, this mission reflects the advice of the great Maori leader, Sir Apirana Ngata. In 1897, he wrote of the need to harmonize one’s conflicting ideas while daring “to wander in moments of the greatest exaltation and wildest imaginings.”


1. Malcom X was fatally shot on February 21, 1965 while addressing his followers in New York City. Three members of the Nation of Islam were convicted of the crime.