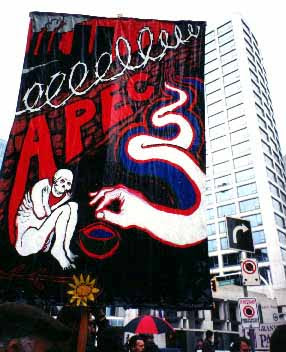 A public forum and discussion

In the lead up to APEC, the Asia Pacific Economic Forum, new laws
have been passed that give police massively increased powers in
Sydney from the period 30th August until 12th September 2007, and
introduce new criminal offences for protestors.

Across the political spectrum, spaces for resistance to the
neo-liberal agenda are shrinking due to increased state surveillance
and the criminalisation of dissent.

But even under massively oppressive conditions, throughout history
people have always resisted unjust and oppressive governments.

Such resistances are possible when genuine solidarity exists amongst
different groups within social movements.

Solidarity increases the political space of social movement
groups. It allows people to trust one another, to engage in meaningful
acts of social change, and be stronger as a united force.

This forum will explore ways of effectively resisting the agenda
of APEC and the violence of the state.

Endorsed by: Anti-APEC Network and Latin American Solidarity Network
Posted by Ana at 17:15