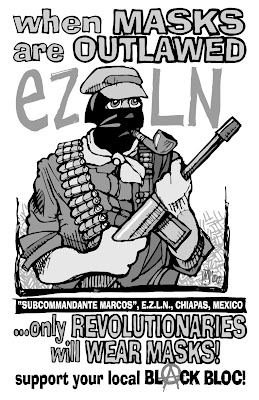 This conference of Mexican and international anarchists was specifically organised in advance of the Zapatista encuentro in order to discuss the involvement of anarchist collectives in La Otra Campana.

The agenda of the conference included a number of themes. First, mobilisation against the ´Security and prosperity agreement ´ meeting (aka ASPAN) of the heads of state of Mexico, the US and Canada due to happen in Montreal 19-21 August (www.psp-spp.com/) was discussed. This meeting will bring about a major extension of the militarisation of the borders, an extension of economic integration and exploitation by corporates. Some 30 Corporate execs have also been invited to help divide up the remaining spoils of the north american continent. Solidarity actions are being planned by Mexican collectives around the country.

The next item on the agenda was the No borders-Sin Fronteras camp that is due to happen along the US-Mexico border in the second week of November (noborderscamp.org/). This camp will be an attempt to create an autonomous zone on top of the imposed arbitrary line of the US-Mexican border. A week of action against borders, capitalism and racism is planned. This is a really exciting campaign as the border is a major political issue in the US. There is certainly potential to change the nature of the discourse around borders and by extension, capitalism and exploitation.

During the afternoon of the first day of the conference, we learned of the situation unfolding in Oaxaca. People who were going to an important cultural celebration were attacked and beaten by police. At least 40 people were arrested and one woman was murdered by police. Many many of the people at the conference were overcome with grief and astonishment at this unprovoked attack by the state after a period of relative calm. The conference issued a communiqué and many people attended a solidarity demonstration at the local prison in San Cristobal on Wednesday.

Further to the situation in Oaxaca, we had an extensive discussion about support for political prisoners, both in Mexico and around the world. Some of the ideas discussed included a project in Brazil where families come to a local radio station and broadcast messages etc to family members who have been jailed. Another project is the community policing being done in the Mexican state of Guerrero (www.policiacommunitaria.org). This project is largely to protect the local community from the police and military, and includes an autonomous justice system for dealing with issues within the community. 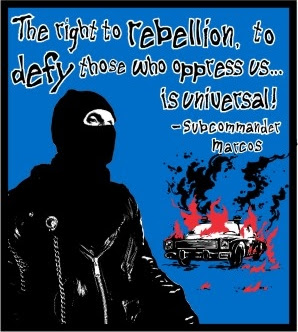 The Anarchist Black Cross (www.anarchistblackcross.org/content/index.html) is planning major days of action at the same time as ASPAN, ie. 19-21 August. My understanding is that one of these days coincides with the murders of anarchists Sacco and Vanzetti by the US state.

The analysis of La Otra Campana by a plenary session of the conference proved very interesting. Many of the participants have extensive experience working in Zapatista communities and have significant and relevant critiques of the EZLN and of La Otra. Some of the critiques include the hierarchical reality of some of the organising (as opposed to the rhetoric), the division between the EZLN and the working people in the cities of Mexico, the lack of indigenous commandants in the leadership, and the reality of the continued inequality of women in communities. One participant who has 10 experience working in these communities said that his collective had not signed up to La Otra because they felt that there was little room for criticism and that for years, they had not made criticisms because they had continued to hope that things would change. As you can imagine, the historical examples of anarchists putting aside their ideals in favour of the revolution now were invoked (e.g. Espana y Russia).

Having said these critiques, most of the participants felt that it was extremely important that anarchists continued to be involved in La Otra. On one hand because the Zapatistas had tried to make room within La Otra for them and that this represented one of the most important political spaces of our time. On the other hand, anarchists felt that they were very marginalized here and that it was important to participate even if it meant a continual struggle against authoritarian communists and socialist groups.

On the final night of the conference, the women presented a letter to the entire conference challenging the men to examine their participation in patriarchy. One woman specifically called a man out for his violent and abusive behaviour. This caused quite an emotional and heated response by a crowd of men who walked out of the conference. This action of attempting to hold people to account for their violence towards womyn was a first for Mexican anarchists and represents a great step. There is much work to be done, however, many men there are interested in accepting the challenge.

The Zapatista encuentro starts tomorrow (Friday) and goes for 10 days. Anarchists will feed into the conference at all opportunities and no doubt will learn much about organising autonomous spaces.
Posted by Ana at 10:42