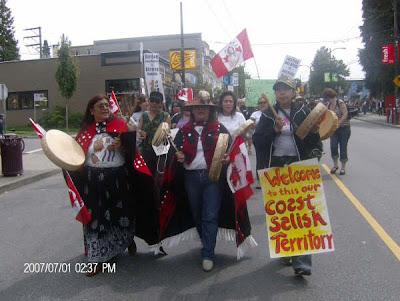 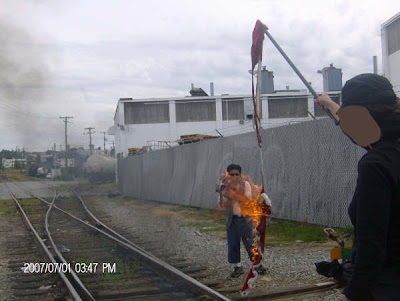 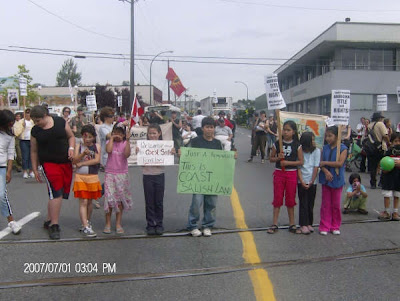 On July 1st 2007, over 200 Indigenous women, children,
Elders and men took the streets and the train tracks
on a march and blockade to mark their resistance to
Canada as an oppressive force against their people.
The march began at Grandview Park and proceeded down
Commercial Drive to Venables Street where the CN rail
lines were occupied and blocked for over an hour.

During the blockade a Canadian flag was burned on the
tracks by an Indigenous person, and several other
Canadian souvenir flags that had been painted with the
words No Justice on Stolen Native Land were burned
by about 40 Indigenous people at the action.

The group stayed strong throughout the blockade in a
show of force to let the Canadian government know that
Indigenous people will not take state oppression any
longer.

The march returned to Grandview park, again blocking
traffic on the roads and intersections. The police
presence was small, consisting of mostly bicycle
units, and efforts to direct traffic were non-existent
for at least an hour.

"Today we are remembering our eldest elders, those who initiated the long
struggle of resistance against the arrogance of Power and the violence of
money. They, our ancestors, taught us that a people with pride are a
people who do not surrender, who resist, who have dignity." - from Our
Word Is Our Weapon
- Show quoted text -
Posted by Ana at 15:42