Maori are from pas, Pakeha are from Uranus 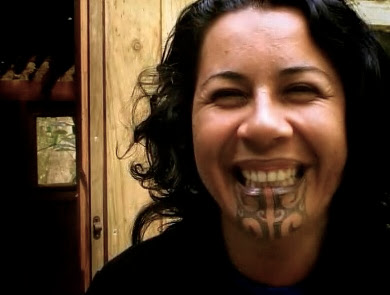 
Thanks to Tia for this

Time magazine has turned its global gaze on New Zealand's violent gang culture in a cover story exposing the street brutality behind the country's peaceful image.

Describing a Culture of Violence, the South Pacific edition of the international magazine uses the killing of Wanganui two-year-old Jhia Te Tua as its hook to vividly describe New Zealand's gangs – both Maori and Polynesian.

Time says New Zealand is regarded as a pleasant and peaceful place to live.

"Yet this island nation harbours a small, unique and brutal street-gang culture that has defied authorities for more than 30 years and now appears to be nurturing a new, more violent mutation."

It said the country's older ethnic gangs had been involved in a series of tit-for-tat drive-by shootings, and South Auckland juvenile gangs had "emerged as a new force in crime, linked to eight killings and many hundreds of other violent crimes in the past two years".

"The generation we are working with now – the 14, 15 and 16-year-olds – some of them are hard-core, already gone," South Auckland youth worker Sully Paea told Time.

Ott mimicked their delivery in his own message: "I'd like to say to these kids, `Hey, wake up, bro. You are not going to bust a cap in my mo'fo' ass. You live in a suburban street in Counties Manukau'."

Maori Party co-leader Pita Sharples said Time emphasised the dangers of gang culture without recognising the efforts being made to get them talking rather than fighting. "It's a bit disappointing they did not acknowledge the good things."

Time said that while ordinary people rarely encountered gang members or fell victim to gang violence, the gangs' reputation for brutality is deserved.

It says about 70 gangs, with more than 1000 teenage members, were prowling the depressed suburbs of southern Auckland

Have you seen the offensive cover of the latest Time Magazine?

It tells the world that Maori culture is plain violent. Want to help us tell our own story? Do a little culture jamming!

How to culture jam: Cut this headline out and paste it to the cover of Time magazine. Attach the article. Photocopy. Distribute.


We may not have words to explain it but Maori and Pakeha live in parallel worlds. Maori do our things and many Pakeha do theirs, unaware of the parallel world that exists in this country.

That’s why it’s easy for a Pakeha from Time magazine (especially a foreign one) to write a cover story about Maori being violent: “they are a bad people”. But this ‘inside scoop’ celebrates how we have survived as a people. This is the greatest miracle. We have survived, prospered and are asserting our place in the world.

At this time we’re in the battle of our lives for justice. Sadly, people living over in Uranus, sometimes in the same street, ignore this reality at our peril.

Consider the differences between pa life (life for Maori) and life on Uranus:

* On the Maori news every second story is about the Treaty. On Pakeha TV the Treaty hardly exists.

* Many Maori spend a lot of time at the pa, doing pa things. It’s a rich world. Most Pakeha miss out on this.

* We’re fighting for justice but the system has no worries throwing 2 billion dollars into new prisons. The people in the prisons are the victims of the land grabs that the Waitangi Tribunal was set up for – but we know how slow this end of the justice system is. It’s a killer. In 8 years of Labour, all Manurewa got was a prison.

* Schools churn out Maori for decades with no qualifications and there is zero accountability. The Wananga starts to help our people through education but the government closes half of it down and pays an accountant $3m to do so.

* We are outnumbered by immigrants in our country. No way did the Treaty allow for that.

* On Maori TV we do marae makeovers for collective wellbeing. On TVNZ you do it for personal gain. Even the ads for The Apprentice flash ‘greed is good.’ How’s that for brainwashing?

* White folk are building fences on the beaches and telling us we can’t go there. If you need proof read the ‘land for sale’ pages of your paper and you’ll see how gates are being built so that only the greedy can use the best bits of land.

* In kura kaupapa Maori our kids come out bilingual. If they transfer to non-Maori schools many monolingual teachers think there’s something wrong with these awesome bilingual kids and make the transition hell. Check the suspension stats and think about what future the schools are providing for our kids.

* We all own and share the Harbour Bridge but the government wants it all to itself, it won’t share the flag poles. This is plain greedy.

* The Maori housing crisis has been around for decades. When it starts to hit Pakeha, we give it a name (‘crisis’) and start looking for solutions.

* People from Uranus side with John Howard when he sends the ARMY into Aboriginal communities, and TAKES THEIR LAND. How can the army address child abuse!

* We are the ones who had our land and language taken from us, and we’re still recovering. Imagine the people we would be if we had maintained our reo and we still had our lands.

After 200 years in this neck of the world most Pakeha still don’t know the Maori, Pacific and Aboriginal peoples. They don’t know the language and are psychologically on another planet. When they build their housing developments (on Maori land), they build it to look like Europe (this isn’t Europe folks) and call them Huntington, Whisper Cove, Pegasus, gated community this, Sherwood Forest that. It’s real insulting when you’re from the pa and you know ‘this place already has a Maori name’, hell, you think ‘how did they get that land in the first place?’

You know you live in different worlds when the police pull you over, when the security follows you or the shopkeeper shortchanges you. When someone else says the solution to Maori involvement in the justice system can be solved by importing police from England (isn’t that where our raruraru started?)

THE issue facing Maori is non-Maori controlling the pie and doing a ratshit job of it. If we failed at prison rehab, education or health programmes like they do, we would be shut down. The difference over in Uranus is that many people from there fail to fess up to their responsibilities and failures, like:

* the Muliaga family case (“it was her fault”)

* TV (“why should we have Maori on TV?” The worst part is, we pay for TVNZ through our taxes, who then insult us and present a one sided world)

* prisons (lots of people making careers from Maori misery, and failing to rehabilitate)

* deaths at work (Maori and Pacific pay the price)

* giving the power and water companies a license to print money and acting innocent when we find that 30,000 families face having power cuts every year

* continuing to sell government land that they could be giving back to the Maori it was taken from (Napier Hospital, Hauraki, Far North, Taupo). The worst thing about it is the Maori housing crisis just down the road from these lands.

Pakeha have a sense of entitlement that they brought with them in eighteen sixty something. What does this entitlement look like?

* Saying the foreshore belongs to all of us

* “We need oil so we will take your country from you”

* Renaming everything with names from somewhere else

* The breed of whakahihi and often racist news presenters (Holmes, Veitch, Paul Henry). A Maori would never get away with acting like this on TV.

* Possessing all the ‘race based privilege’ and saying Maori have got it, like, we have more of the pie than them. Calling us greedy for having programmes that suit us.

The good news is that we all want the same thing, a future for our kids and a wellbeing for the community. The trick for Pakeha is to snap out of their blinkered thinking and to realize that Maori is the best thing going in Aotearoa. The messages portrayed currently are that Maori = bad. If they turn this on its head (and Maori already have), they’ll be getting somewhere.

It’s like the stories on the Aboriginal issues. Pakeha TV shows their people having riots and drinking beer. Without other information this will be what the people know. Maori TV, based on our pa world, find pictures of Aboriginal people feeding the kids and talking about their dreams.

So when the Pakeha news and TV starts showing Maori in all our greatness, and fesses up to its own lack of knowledge, we’ll be on the path to equality. We don’t really want everyone to move from Uranus to the pa, but we do need them to make the mental shift to living in Aotearoa, with its 1000 years of history and the yearning by tangata whenua for justice. To deny this for any longer will just be a drag!

if you took the time to read the blog in total you would come to the understanding that yes I am for the independence of Maori people but am also staunchly anti racist.

I agree maori shouldn't be so dependant

Of course you know I mean poltical Independence mr anonymous, I suggest you attend a decolonisation workshop and then comment.

National indepenance is an impossible dream. No nation has ever achieved it or ever will. Nearly every nation has had land stolen. Among them china,england,france,america,ireland,germany,australia,nz,africa. It always happens when one nation or tribe conquers another.My ancestors had their land stolen. Even if were given back I doubt I would get any. So I just accept it.

Oh well thats where we differ, I would rather fight for a dream than live in a nightmare.

All the fighting and wars fought for thousands of years have never achieved the dream or ever will. It is a contradiction to believe that justice and peace can be obtained through fighting, if it could we would be overflowing with justice by now. millions have already died fighting for peace and the result is we have less of it.

Hi ana,
I am Pakeha, I have a young family of beautiful blonde boys. I live in predominantly Maori populated suburb in Taranaki. I'm a freelance designer with strong ties to local iwi on a couple of projects i'm working on right now. I may have a European whakapapa, but have no alliances to Europe other than my first language. (which I had no choice in the matter)I was born here and have been nourished and formed from the bounty of Papatuanuku the same as you. I don't want to see any fenced beaches either, and Id never expect anyone to walk around me on the street because they are maori. Please don't lump us all into the same category as bigoted opressors.

I dont for one. until the people realize who the real oppressor is we will all be slaves

I just wanted to know whether you recognise the ancestry of other cultures. I can trace my ancestry back to 937 AD Ireland and I am a descendant of an Irish King. Would you also support my fight for justice? Am I entitled to land as well?