A textbook start of a revolution 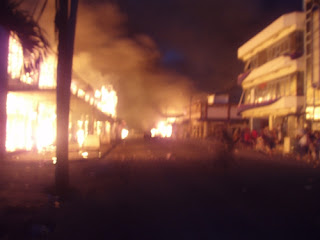 Another week, another Pacific nation in trouble. While the eyes of our diplomatic service were fixed upon the expensive illusions of Apec and the more chimerical notion of global free trade, Tonga was blazing.

Estimates of the monetary cost of last week's conflagration in downtown Nuku'alofa range upward of $100 million. The damage caused to the tiny island's social fabric is incalculable.

Why didn't our Government see this coming, or try to prevent it?

A monarchy grown decadent and dangerously distant from its people. The blurring of governmental and commercial roles on the part of the royal family and its court favourites. Severe economic hardship caused by eccentric policy-making and endemic corruption. The unwelcome presence of foreign adventurers and entrepreneurs. Persistent and articulate voices raised in favour of fundamental political reform.

Mass demonstrations and strikes demanding constitutional change. Insincerity and incompetence from those entrusted with the task of defusing the crisis. An explosion of popular anger. The intervention of foreign troops.

Here's what happens next.

Popular feeling against the Tongan "establishment" intensifies. Its government's determination to identify and punish those responsible for the destruction of downtown Nuku'alofa is interpreted as an attack on the entire pro-democracy movement.

The participation of the New Zealand defence and police forces in the government investigation persuades a large number of pro- democracy activists that Helen Clark is siding with the king against the people. Protests against the New Zealand and Australian intervention forces become increasingly aggressive. Kiwi soldiers and/or police officers are attacked and unleash deadly force in their own defence. A number of Tongans are killed.

Tragedy in Tonga translates to crisis in South Auckland and a major threat to New Zealand's national security. In Manukau city, home to tens of thousands of Tongan immigrants, massive protests erupt. The protesters are joined by Solomon Islanders, Fijians and other Pacific peoples.

Government property is attacked, cars are overturned, and the Manukau city centre is set ablaze. There are pitched battles in the streets between Pacific Island youths and the police. Scores are injured, and an 18-year-old Tongan student dies of head injuries inflicted by a police baton.

The Government declares a state of emergency. Troops are recalled from Afghanistan, East Timor and the Solomons. The western Pacific's "Arc of Instability" now includes Aotearoa. Suddenly, our security environment no longer seems so "benign".#paraALL right, this is a worst-case scenario. But that in no way lets MFAT and the SIS off the hook. Isn't it their job to prevent such a dire sequence of events from taking place?

Did they miss the population explosion in the western Pacific? Are they not aware how demographically skewed the island societies have become with more than half their populations now under age 25? Without jobs, did it not occur to MFAT that these youngsters might turn to political agitation? Has the SIS never wondered what might happen if New Zealand soldiers attached to Ramsi ever started shooting at Pacific Islanders with relatives back in Otara and Mangere? Has nobody ever considered the possibility that with so many Pacific Islanders now living in New Zealand, a major political upheaval back in their homeland might end up sparking one in ours?

In the end, it all boils down to one word: racism. Ever since New Zealand forces shot and killed the leader of the Samoan independence movement back in 1929, our government has never really considered Pacific Island peoples, or their politics, to be serious subjects of diplomatic interest.

A corrupt, feudal-style monarchy thwarting the political, economic and cultural development of the Tongan people? Of what concern is that to us? It's just the "Pacific way".

There's a revolution coming. Best not be there when it starts.