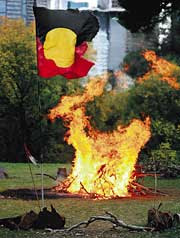 Camp Sovereignty supporters today gathered in King's Domain in
Melbourne to celebrate the anniversary of the successful 60 day
occupation held there in 2006. A fire ceremony was held prompting a
visit from Police and Fire authorities. After friendly negotiations,
it was agreed the fire could stay there until 8pm in line with the
agreement between MFB and Aboriginal People about the use of and
respect towards sacred fire.

About an hour later during a peaceful family picnic a different group
of police arrived and pushed through the crowd, including women and
small children, and extinguished the fire. The people present proudly
stood up to this blatant colonial oppression, both physically and
verbally. A human wall was formed to protect the fire and shouts of
"shame" drowned out any attempts by police to try and justify their
bullying behaviour.

After the police left the fire was re-lit to the delight of supporters.

Police returned and the fire was extinguished again.

The fire was re-lit again.

Police returned and, you guessed it, the fire was extinguished again.

Despite agreeing to allow the ceremony to take place earlier in the
day there was an obvious order from another authority to extinguish
the fire.

Victoria is now covered by human rights legislation which protects the
right of religious expression. This right was violently obstructed by
Victorian Police today in yet another display of racist colonialist
policing.