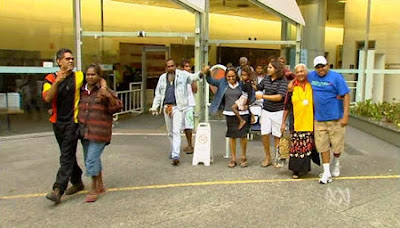 FOUR Palm Island men were yesterday cleared of involvement in a riot
sparked by the death in custody of Mulrunji Doomadgee.
A Brisbane Supreme Court jury deliberated for two days before
acquitting them.

The riot erupted on November 26, 2004, a week after the death of
Doomadgee in a police cell at Palm Island, 40km off Townsville, the
trial was told.

Islanders attending a meeting to hear the results of an autopsy on
Doomadgee's death grew angry on hearing a finding that he had died
accidentally.

Rioters marched on the police station and burned it down.

They also burned the court house, a police dwelling and a police car.

However, the prosecution did not allege during the trial that any of
the four accused men lit the fires.

Prosecutor Michael Cowan said the Crown case was that the four were
part of a joint enterprise and the fires were a probable result.

Mr Blanket's defence barrister, Mark Green, said in his final address
that the prosecution had painted the accused as being part of a crowd
that marched on the police station with a common purpose and
"celebrated in the flames".

But Mr Green said many in the crowd were simply "looking for answers"
about Doomadgee's death.

Outside court, Mr Poynter was asked if his faith in the justice system
had been restored.

"Yeah, down in Brisbane, anyway," he replied, in a reference to the
fact that the trial was held in Brisbane instead of Townsville because
a survey found that most residents of the north Queensland city had
racist attitudes towards Palm Island Aborigines.

Mr Poynter said he could hardly wait to get back to Palm Island.

"We've been taken away from our families and our homes and our
environment and chucked into a big city like this," Mr Poynter said.

"We're glad this is all over."

Former Palm Island police officer Senior Sergeant Chris Hurley has
been charged with the manslaughter of Doomadgee and will face trial in
Townsville this year
Posted by Ana at 16:44

City 'too racist for cop's trial'

THE manslaughter trial of Palm Island policeman Chris Hurley should be
moved to Brisbane because of the difficulty of finding an unbiased
jury among Townville's racist residents.

The lawyer who commissioned a survey that effectively found Townsville
residents were racist, called yesterday for the trial of Senior
Sergeant Hurley, who is accused of killing Palm Island Aboriginal man
Mulrunji Doomadgee in custody in 2004, to be shifted to Brisbane.

Sydney-based Stewart Levitt was a member of the legal team that
succeeded last year in convincing a judge that the trial of Lex
Wotton, an Aboriginal man accused of rioting on Palm Island, should be
moved from Townsville to Brisbane.

The judge's decision was based partly on a survey that found less than
5 per cent of Townsville residents had positive attitudes towards
Aborigines and more than 50 per cent would not be able to put aside
their prejudice during a trial.

Sergeant Hurley is due to face trial in the Townsville Supreme Court
in June.

Queensland Attorney-General Kerry Shine said he had no intention of
moving the accused policeman's trial.

Mr Levitt, who is not involved in Sergeant Hurley's case, said that
given the survey's findings, he believed it would be difficult to find
a Townsville jury that was not biased towards the policeman defendant.

Mr Levitt said he was a frequent visitor to Townsville and had often
encountered racism there.

Mr Wotton has been charged with rioting causing destruction during the
strife that erupted a week after Doomadgee's death.

He was due to face trial in the Brisbane District Court this month
along with four other Palm Island men charged with rioting causing
destruction.

Mr Wotton pleaded guilty before the trial started and has since been
held in custody awaiting sentence.

The four others were acquitted by a jury on Thursday.

About six hours before the verdict was handed down, Mr Wotton - who is
now being represented by retired federal court judge Marcus Einfeld -
announced through his legal team that he wanted to withdraw his guilty
plea and to face trial.

Judge Milton Griffin ordered that his application be heard on
Thursday. But in another development, Mr Wotton's lawyers yesterday
asked Judge Griffin to step down from the case because of alleged
statements he made about Mr Wotton during the trial of the four others.